Mini Cooper S 5 door road test report and review: The five-door Mini is the latest chapter in this remarkable brand’s success story. DAVID HOOPER has been putting one to the test and finding out if it is easier to live with than the three-door original.

THE thoroughly modern Millie is another of those cars which came into being as a fairly honest remake of a much-loved classic, but has gone on to morph into an entirely new brand. Under BMW ownership, The new Mini has been an unprecedented success, selling millions of examples all over the world. The latest addition to the range comes with a five-door body style, something the original Mini never offered. While some purists may not be too keen, the five-door Mini does actually work very well, making it far easier to get young children or even middle-aged adults in and out the back of the car without those in the front having to bale out, hold doors open and fiddle with folding seatbacks! Obviously longer than the three-door version, the five-door offers good space and ample room inside for most. Our test car featured lovely pale blue paintwork, a white roof and spoiler over the rear window, and white stripes up the bonnet, with smart alloys and the red “S” badge finishing off what is for me a very nice looking little car. It’s a while since I last drove a Mini, and in its latest guise you really do sit in the car, thanks to a low seating position and relatively high dashboard top. The windows are not the largest you will find in the motor industry and the shape of the windscreen makes it feel as though you are looking out of a letterbox at times. Our test car came with so many toys and gadgets I was still finding them after living with the car for almost a week. Even the bezel at the bottom of the gearlever formed part of the cars control systems, allowing the driver to select between the normal drive setting, sport mode or a green setting for the most economic driving possible. 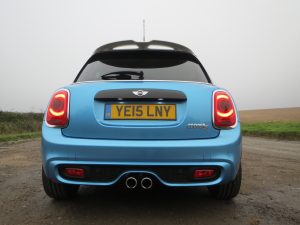 I loved Minimalism, for example, which coaches you to drive economically (although it didn’t work for long in my case), while another menu called Driving Excitement just had to be explored! This gave you Power and Torque gauges so you could see exactly how much of the car’s performance potential you were using. Of course there is also a trip computer which showed that during my few days with the car it averaged 36.7 miles to the gallon over a distance of 540 miles. The large round dial in the centre of the car is now home to the media centre radio satellite navigation and telephone systems. The top of a rotary dial allows you to actually write letters on it, rather than having to twizzle the dial to spell words or addresses for the satnav. However its position on the centre console next to the handbrake and behind the gearlever makes it quite hard to access for those with long-ish forearms, especially with the central armrest down, so the armrest spent most of his time in the upright position. It would be better if the cup holders which are in front of the gear lever were turned 90° and positioned next to the handbrake. This would allow the gearlever to move forward and get the cars main controls forward another 4 to 6 inches. While the green setting is commendable, and helps you eek out the maximum miles per gallon, the most fun is to be found in the sport setting which sharpens up the car’s responses and stiffens the suspension noticeably. The lively 1998cc engine is a willing performer and pulls strongly through the gears, it even blips the engine for you on the downshift to save you the effort of heel and toeing to smooth out the gearchanges, and I loved the popping exhaust which burbles away behind you when you lift off the throttle on the over-run. The steering is very sharp and responsive and on this model featured red stitching on the steering wheel to emphasise the sporty theme of the Mini Cooper S. The car is a comfortable travelling companion, but the wide tyres did transmit a lot of noise into the cabin on some road surfaces, which is really the only thing that let the car down with a view to living with it on a daily basis, but if you turn up the radio it is easily drowned out. Long gone are the days when the Mini was a cheap car, but it is still a car for the masses which is enjoyed by people of all ages and sexes, and whether it comes with three or five doors, one thing has not changed – and that is the fun factor which is still there in abundance. It’s not hard to see why the Mini is the success story it has become, it is fun to drive and it puts a smile on your face, and with so many permutations to choose from there is almost a Mini to suit everybody – the five-door bodystyle is just the latest chapter. The next chapter will be the new Clubman which is just going on sale and will complete the Mini family for the time being, but who knows what BMW has up its sleeve next, we will just have to wait-and-see where the Mini brand goes from here. Rating: