Ducati Multistrada V4 S road test review: Widely regarded as the best bike of the year, DAVID HOOPER has been putting this techy tour de force through its paces

IT’S not often a motorcycle makes as big an impact as the new Ducati Multistrada did when it went on sale – lauded by most expert reviewers as the best bike to be launched in 2021.
Plaudits came thick and fast from all bike mags, the year culminating in it being named European Bike of the Year. It’s pretty good then! And it’s done quite a lot for Ducati’s sales figures, quickly becoming its best seller – and it comes with a four-year warranty.
Perhaps not surprisingly I love it too, it’s my kind of bike, especially this Travel and Radar model, not only for its performance and addictive engine note, but also for its stunning Italian good looks, and little touches like keyless ignition, illuminated controls so you can see them at night, a built-in phone holder, its practicality with the luggage for touring (although the top box is a pricey cost option) and the cutting-edge technology it features. 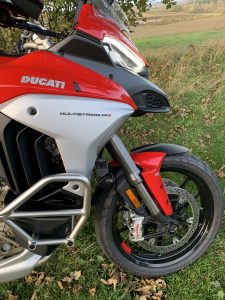 Commonplace in today’s cars, this is the first bike to feature Adaptive Cruise Control. Made by Bosch, once activated it will follow the vehicle in front and adjust the bike’s speed to match that of the vehicle you’re following and is a god-send on a long motorway trip, as any biker will tell you after holding the throttle open with your right hand for too long. If the vehicle in front slows, indicate to overtake and bike will accelerate back up to its preset speed. If the vehicle in front brakes, so will the Multistrada. It’s brilliant. If you want to deactivate it, just roll the throttle forwards, or touch either brake.
My other favourite feature, and another first on a bike, are the blind spot warning indicators which light up an orange segment on the mirrors if another vehicle encroaches into your blind spot, it’s a real game changer for bikers, and a potential life saver were you to forget your shoulder check before moving out. Great stuff, until your mates decide it’s fun to take it in turns to pull alongside and set off the orange lights!
It also has heated seats for the rider and pillion. Now I thought this was a gimmick, and something I certainly wouldn’t have paid extra for, but on a cold winters morning, it’s amazing. The warmth permeates up through your suit warming much of your torso.
This fabulous looking machine with its stunning Italian styling, is not just eye-candy, it’s a potent sports tourer featuring a fabulous 90-degree V4 engine which packs a 170bhp punch, more than many hot hatches, allied to a fabulous induction sound track at the top of the rev range and a quick-shifter on the gearbox to help you keep the thing on song. Progress can be very rapid indeed, yet the bike is easy to ride and is packed with safety systems like ABS brakes, anti-wheelie control, traction control, cornering ABS, daytime running lights… the list goes on. And most things can be adjusted in the menus to the rider’s preference.
However, for most, it isn’t necessary to fiddle as the Multistrada comes with preset options which cover most bases. You can adjust the electronic suspension for rider only, rider and luggage, two people, two people plus luggage etc.
Then there are the riding modes – these include Urban, Touring, Sport and Enduro for those who like to venture off road. Many bikers do, and the Multistrada, Italian for many, or all roads, is winning a lot of conquest customers from BMW’s revered GS range. 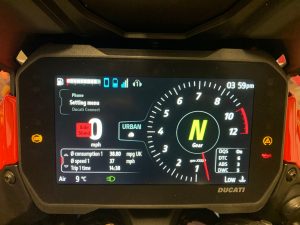 To bolster its off-road credentials, the Multistrada has a large 19in front wheel, and a 17in rear, both shod with Pirelli Scorpion tyres, but the large front wheel doesn’t hinder its on-road handling one iota. The bike was supplied by one of the country’s newest Ducati dealers, Chris Walker Motorcycles, in Grantham, just a few minutes off the A1, and all the staff I dealt with were knowledgeable, helpful and enthusiastic, making you feel welcome as soon you walk through the door.
I clocked up nearly 500 miles, and the big Ducati is a lovely thing to ride. It turns easily and accurately into bends and never feels anything other than completely composed. The induction noise is fantastic at the upper end of the rev range, while the excellent Brembo brakes make sure it pulls up sharply too.
The lovely V4 engine is pretty clever too, when you stop in traffic, or at the lights, it shuts down the rear two cylinders to reduce heat and save fuel, and it makes a glorious burbling noise as it does so.
The dash is a smart 6.5in TFT screen which can be customised to the rider’s preference to show key information on the trip meters. You can connect your phone and intercom to the bike, and then run a sat-nav app which turns your screen into sat-nav which looks great and works reasonably well once you get the hang of it, but there is no Apple CarPlay or Android Auto option which many owners are crying out for.
Ducati’s designers creatively included a little compartment on the top of the fuel tank with a USB socket inside in which to keep and charge your mobile which runs the sat nav. It’s such a great idea but they’ve not made it big enough to accommodate the latest large phones, especially when they have a case on them, and it can be quite a fiddle to extract your phone from the compartment.
The only other minor niggle with the Multistrada is its range, which at around 200-miles from its 22-litre tank could be better for a powerful sports tourer. The glorious V4 isn’t the most economical engine you can buy, returning around 40mpg, maybe a little more if gently touring, but then you don’t buy a bike like this for economy.
All-in-all, it’s a fabulous, all-rounder boasting some of the latest technology which is now leading the way for others to follow. It’s an expensive bike, but it comes with stuff you can’t find anywhere else.
Ducati UK set new sales records last year, largely thanks to this bike, and having ridden it, I am really not surprised. It’s just been joined by a road-focused Pikes Peak model, so Ducati my just break some more sales records this year, too!

If you like this, read about North Coast 500 adventure