MINI Cooper 1.5 Auto 5-door road test report review THE Mini has always been a car big on style and desirability but, well, mini on practicality, even the bigger BMW produced, latter day versions of the model.
That has now changed, slightly, with the hatchback, particularly the five-door version.
It is bigger, longer by 72mm and has more boot space, up by 67 litres and, together with the three door version, is the model’s first foray into the hatchback market.
Parent firm BMW says it will appeal to a fresh group of customers including opportunities in the corporate sector.
It is a more practical car with a slightly extended cabin allowing for a third rear seat, albeit not the most comfortable of positions.
The 278 litre boot is generous and expands to 941 litres with the 60-40 split rear seats folded giving full hatchback flexibility while maintaining the car’s desirability factor.
There are six model variants with the choice of both petrol and diesel engines, with prices start at £14,350. This is just £600 more than the equivalent three-door hatch.
Styling is typically MINI, its funky looks appealing to both young and old with its familiar hexagonal contours of the radiator grille, the circular headlights and the upright rear light clusters. The Cooper model is even more distinctive with its go-faster stripes and body detailing.
Inside, the fixtures and fittings and finish are everything you would expect from a BMW-produced car and include classy soft-touch finish, and neat c 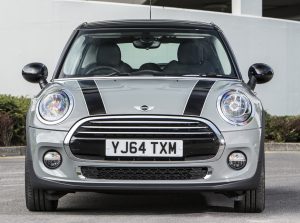 hrome trim. The large windows mean all round vision is good and headroom is decent.
The familiar toggle-switch arrangement now includes a start/stop switch in the middle of the centre console, which glows red.
This model features a central TFT display colour screen of up to 8.8-inches within the huge, plate-sized central dial, which gives information on functions like connectivity, air conditioning, infotainment and navigation, which is controlled via the selection and control of these functions is via a dial in the centre console.
So its more practical, but the driving experience is as good as ever.
The 136bhp 1.5-litre three cylinder engine is a surprisingly refined unit, delivering decent performance, if not fantastic fuel economy.
Mated to a slick automatic gearbox, is slips through the gears effortlessly, pushing the car from 0-60mph in just 7.8 seconds.
It has lost none of its handling capabilities, sitting limpet-like on corners with good feedback from the steering wheel.
The ride on the Cooper is firm bordering on harsh at times on lumpy roads, but levels out on better surfaces.
Claimed economy is up near 60mpg, a figure the on-board computer got nowhere near, but CO2 emissions of 111g/km put it in the 15 per cent Benefit in Kind range, making it a serious business car option.
The economy is aided by so-called MINIMALISM technology which comes as standard includes automatic engine start/stop, shift point display function and brake energy recuperation.
Other standard specification includes alloys wheels, electrically adjustable exterior mirrors, air-conditioning, door sill cover strips with a model-specific inscription, front fog lamps, onboard computer, radio including aux-in, USB interface and Bluetooth.
For safety, standard features include stability and traction control, front and side airbags, plus front and rear curtain airbags. All seats are fitted with three-point seat belts and there are belt tensioners and belt force limiters in the front. ISOFIX child seat mountings are provided at the rear.
As usual, there is a myriad array of option which include head-up display, camera-based collision avoidance system that can automatically apply the brakes if it looks like you’re going to run into the vehicle in front.
It’s a MINI, with all the fun and desirability, but now with added practicality.
Rating:

Or what about the Mini Paceman?