Mazda3 2.2D 150PS Fastback Sport Nav+ review, road test report: With metallic red paintwork and cream leather seats, this week’s Mazda3 has an upmarket look and feel. DAVID HOOPER enjoys a week with one of the best cars in its class.

THE new Mazda3 is excellent – it’s as simple as that. I said so when I attended the launch in Scotland and I still say so now, having spent a week at the helm of the Fastback model, or saloon to you and me.

The Kodo design of the new Mazda3, which means Soul of Motion, follows the lead set by the Mazda6 and CX-5, which is proving very popular with customers. The concept works well in the Mazda3 too, giving the car considerable road presence and stand-out appeal. It looks good from all angles.

The lovely red paintwork of our Mazda3 test car contrasted nicely with the cream leather seats, which were also heated – a welcome addition as the temperatures begin to drop again – and making for a classy-looking car. 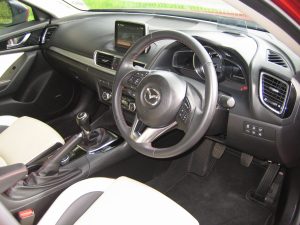 The Japanese manufacturer has moved decidedly upmarket with its latest Mazda3 range, and the quality of the interior fixtures and fittings are noticeably improved over the previous model. The red stitching on the steering wheel and centre armrest and the gear lever gaiter hinted at the car’s sporting attitude. The centre armrest is also home to two USB sockets, a 3mm jack and a 12V socket.

The instrumentation has also received a thorough makeover, with a large, chrome bezzled rev counter dominating the dials facing the driver and including a small digital speed readout, which is duplicated with the head-up display which flips up when the starter button is pressed, and also duplicates the sat-nav information to avoid the need for the driver to lower their eyes from the road to see where they’re going.

A seven-inch colour touch screen sits in the middle of the dash and is controlled mainly by a large rotating button on the centre console and displays music, telephone and sat nav information, as well as doubling as the interface for fine-tuning the car to your liking, and beneath that are the climate controls. 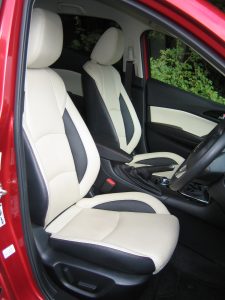 The more you understand Mazda’s Skyactive technology, the more impressive it becomes. The Mazda3 is excellent and the car feels great to drive, and thanks to effectively reinventing the wheel, or the internal combustion engine at least, not only is it economical, but it doesn’t sacrifice economy to achieve that. The 150bhp 2.2-litre diesel engine in our test car is smooth and pulls well through the gears, yet is capable of achieving mid-60 miles per gallon when driven gently, matching the figures and C02 emissions of much smaller engined cars (104g/km) – so you get the best of both worlds.

Mazda’s i-stop system turns the engine off at the lights, or while sitting in traffic, which all add to its economy credentials.

As you would expect from Mazda, the car drives very well and is entertaining, but impeccably behaved when you pick the pace up a bit, turning in sharply, with good body control through the twisty bits, taking quick changes of direction in its stride. My only criticism remains the amount of road noise which finds its way into the cabin on some road surfaces, but with the superb Bose sound system in this car, it’s never too intrusive!

At the back, the boot is a reasonable size, but loading bulky family clutter like pushchairs and buggies won’t be as easy as it would be in the hatchback.

I enjoyed my few days with the Mazda3, it’s a great car to drive and in this spec, to live with, although buyers of less expensive models won’t feel short-changed – there is a good base level of equipment across the range which includes Smart City Brake Support, Secondary Collision Reduction, alloy wheels, air conditioning, USB/iPod connectivity and Bluetooth hands-free system as standard, which all contribute to the upmarket, quality ambiance of this excellent newcomer.