Featuring the latest Kodo design, DAVID HOOPER reviews the new Mazda CX-5 and is impressed by its luxuriously upmarket look and feel.

I TRAVELLED to Scotland for the launch of Mazda’s original CX-5, so I was keen to review this recently facelifted model to see how much things have changed

Featuring the latest Kodo design, the Mazda CX-5 is definitely on a drive upmarket in terms of quality and image. This new model feels quite special inside, but then, as the range-topping example, so it should. 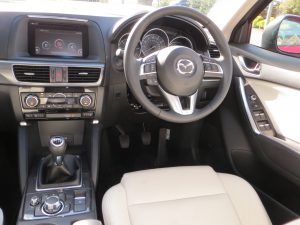 Exterior detailing includes deep black plastic trim around the front valance, wheel arches and side skirts which extends into the bottom of the rear bumper. Our test car featured black privacy glass to create a sense of mystique for those travelling in the rear of the car.

The boot is a good size and features Mazda’s excellent Karakuri seat mechanism which folds down the rear seat back down at the touch of a leaver in the boot to create a large flat load space for carrying those more awkward items.

The lovely Soul Red metallic paintwork of our test car was a £660 option and was complimented by a lovely light stone leather interior (£200)with the seat backs and squabs perforated. There are two memory positions on the seat and the driver’s seat is electrically adjustable, including the lumbar support.

I think the interior of the Mazda CX-5 is now a match for the best in this class and really looks the part.

In the centre console there are three main dials the speedometer in the middle with the rev counter on the left and the fuel gauge on the right. Above the fuel gauge is the trip computer which shows the remaining range, current mpg, average fuel consumption and average speed.
The steering wheel has several multifunction buttons to control the cruise control and speed limiter system on the right-hand side and the volume, radio channels and telephone controls on the left.

A touchscreen in the centre of the dashboard controls most of the car’s main functions including the telephone, satellite navigation and various applications which make conducting your business on the move much easier than it ever used to be.
A rotary knob controls the multimedia system which is reasonably intuitive, although I did tussle a bit with the satellite navigation. It would also be useful for the turn-by-turn instructions to be replicated on the central instrumentation, so that when your teenage son takes over the music system when you need to keep an eye on the satnav, you won’t have to come to blows in the dispute over who should have priority!!
Climate control air conditioning is also standard, as are electrically heated seats on this model. 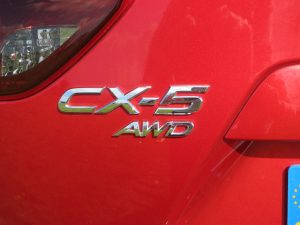 There is good storage space around the cabin. There’s a useful space in the centre console which has two USB connectors, ideal for collecting your phone or iPod to the car’s multimedia system. There are also two large cup holders in the centre console and another useful space for storing the car keys which don’t need to be inserted in the dash as this car features keyless entry and start as standard.

Powered by Mazda’s excellent Skyactiv technology in both petrol and diesel engines, the car also comes with i-Stop to help save fuel and keep the C02 emissions down.
There’s plenty of help for the driver two, with collision avoidance technology, blind-spot monitoring, lane-change warnings and tyre pressure monitoring.

During my test of around 670 miles the car averaged 38.6 mpg. That mileage comprised mainly of motorway driving, although fair bit of sitting in traffic jams on the M40 and quite a bit of slow speed work around towns and cities included as well.

A gear-change indicator positioned at the bottom of the rev counter helps to maximise fuel economy by prompting you to change gear at the most appropriate times.

Despite an horrendously long journey back from the south of England thanks to Friday night Bank Holiday weekend mayhem on the roads, the Mazda CX-5 proved itself to be a very comfortable travelling companion even after several hours at the wheel.
Rating:

If you like this, read our review on the Mazda2