Honda Civic Type R road test report review – Alistair Coull has a look at the fastest and most powerful front-wheel-drive hot hatch ever!

AFTER a five year wait, the arrival of the world’s most keenly anticipated hot hatch is only weeks away.
Honda’s fourth generation Civic Type R will be the fastest and most powerful front-wheel-drive hot hatch ever.
The 2.0-litre turbocharged petrol engine will rocket from 0-62mph in 5.7 seconds and hit a 167mph top speed and is mated to a short throw six-speed manual gearbox. No automatic option is available.
Its blistering performance is unmatched by any rivals, including the more track-based Renault Megane Trophy-R. The Type R’s 7m 50.63sec Nurburgring lap time dethroned its French rival as fastest front driver – a feat kept quiet for months by the Japanese car maker.
Asked whether that had been the priority during the car’s development, project leader Hisayuki Yagi admitted it had. “But it wasn’t the only target we had. We also had to think about daily usability, fuel consumption and emissions – all those sort of things,” he said.
A sub-£30,000 price tag could also be a compelling part of Honda’s strategy to return from mediocrity.
The £29,995 starting price could put one of these cars on anyone’s driveway for £300 a month. That is seriously tempting.
The last generation Civic Type R was launched at the worst possible time – just as the world went into economic meltdown in 2007. 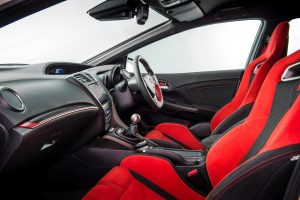 It struggled for sales, as did all hot hatches – and was finally killed off in 2010.
The UK had always been the main European market for the Civic Type-R and Leon Brannan, head of cars for Honda UK, said now, with the economy recovering, was the right time to bring it back.
This year Honda hope to capture around six and a half per cent of the market with around 1,500 sales. “Then we will see how it goes,” said Brannan.
It was also important that the car was built in Britain, at Honda’s plant in Swindon, where it would be a halo product.
Although the first cars will be in dealerships in July, advance orders mean new customers are unlikely to take delivery before September at the earliest.
Honda believes sales will be evenly split between the entry-level car and the better-specced GT version which will cost £32,295.
For digging deeper into your pocket you get front and rear parking sensors, dusk sensing headlamps, rain sensing wipers and electric folding door mirrors as well as sat nav and an upgraded audio system.
The GT will also have blind spot monitoring, cross traffic monitoring, forward collision warning, lane departure warning and a traffic sign recognition system linked to the sat nav.
At the heart of the car is an all-new 2.0-litre direct injection turbocharged VTEC petrol engine that delivers unmatched power, torque and performance. Peak output of 306bhp at 6500rpm (the car red-lines at 7,000rpm) and peak torque of 295lb/ft from 2500rpm – both higher than for any previous Honda Type-R model.
Unique styling changes give the car an aggressive stance but most – like the large wing at the back plus the large rear diffuser which works with the flat underside to ‘suck’ the car to the road – have a function. The sleek, aerodynamic design shouts out it is a car developed to perform at speed.
Other design features include a front bumper shaped to reduce turbulence around the front wheels, a wide front splitter, flared wheel arches which at the front allow extra cooling for the engine and larger front grilles, also for better cooling.
To help the car keep its prodigious amount of power glued to the road it has a special Dual Axis Strut front suspension and a mechanical limited slip differential.
The front suspension has an extra steering knuckle which reduces torque steer by as much as 50 per cent compared to a standard Civic hatch.
The modified rear H-shaped torsion beam suspension improves roll rigidity by 180 per cent and hugely improves stability on high speed cornering.
Adaptive dampers at each corner keep the car planted while a retuned electric steering system gives better response and feel.
In order to access the full potential of the chassis and engine, the car is equipped with a ‘+R’ button to the side of the steering column. Push it and the whole character of the car changes.
Engine response is increased, there is more aggressive torque mapping, steering assistance is reduced and the dampers are firmed up by 30 per cent. The dash also turns from white to glowing red.
Such is the Jekyll and Hyde effect that Tesco, if it was selling the car, would be calling it a two for the price of one offer.
Honda, in a more refrained way, bill it as race car for the road.
On the road, pure aggressive power through brute force and complete over-engineering has created an animal (Honda’s description, not mine).
Push the start button and the noise from the four exhausts will be music to any track fan’s ears. Your granny might not feel at home in the high-backed, suede-effect, figure-hugging sports seats but the car is quite happy to pootle along at a civilised 30mph if it has to.
For a performance car it is remarkably comfortable. You don’t get bounced about as much as you do in some rival hot hatches.
Only once during a two-hour route out of the Slovakian capital Bratislava and into the neighbouring, rolling Austrian countryside was the car jarred enough to make the teeth rattle.
Tame in town, maybe, but you always get the impression the tiger is just waiting to be unleashed.
Floor the throttle once you hit the open road and the car’s character is transformed. Response is immediate and the handling phenomenal.
The active dampers at each corner keep the car so flat on the road, helped by the big wing on the back creating tremendous downforce, that you are tempted to push the car through bends at speeds you wouldn’t dream of doing in less able cars. In +R mode it takes on an even more aggressive edge and feels even more agile.
Take the car on to a track such as the Slovakia Ring, and with someone like 20-year-old professional race driver Gabriela Jilkova sitting beside you, and you can really find out what this car can do.
Five laps of the six-kilometre long track left you stunned, exhilarated, scared (if you had almost missed a braking point) but totally thrilled by the experience. Adrenalin-fuelled fun – absolutely. Track day fans will love this car. French rivals Renault might not.
Driven sensibly the Civic Type R should return around 38mpg. I wonder how many will. The engine is certified for the latest Euro 6 emissions and emits 170g/km of CO2.
Safety kit includes driver, passenger, front side and front and rear curtain airbags while braking is taken care of with 18-inch vented and drilled Brembos at the front, 16-inch at the back.
I loved the car but there is no denying the engine can get a bit noisy. Committed Type R fans won’t be bothered but it might not suit ordinary people just looking for an everyday hatch with sporty credentials.
Click here to find out more about the Honda Civic Type R