HAVING passed earlier this year a global production figure of 5m, Mazda’s best-selling 3 model, renewed in 2014,  gets a mid-term makeover.
Nothing radical – Mazda buffs will spot a revised grille and foglight surround – but such subtle exterior styling changes, plus catch-up new technology and a freshened interior with a modest £200 price rise should help it to continue to nibble away at such as the Ford Focus, VW Golf and Vauxhall Astra.
In fact, Mazda UK sales jumped 20 per cent last year and since 2012 have enjoyed two to three times average market growth here, says buoyant boss Jeremy Thomson.
In five-door Hatch or four-door Fastback form, the revised Mazda 3 range is 22-strong, covering four levels of trim, four engines – two petrol 120 or 165 PS and two diesel 105 or 150 PS – at prices from £17,595 to £24195. 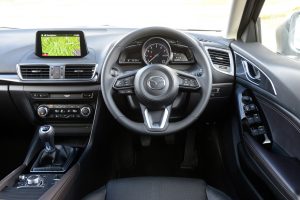 Best-seller is expected to be the 2.0-litre, 120PS petrol hatch in top Sport Nav trim we spent most time in on a demanding 200-mile brisk day-drive from Aberdeen around the glorious, sunlit Scottish Highlands.
It took in upland ski resorts, mountain passes, wilderness tracks and sections of both the Highlands Tourist Trail and a Whisky Trail of distilleries – although with zero alcohol tolerance on Scotland’s roads there was strictly no imbibing along the way.
At £20,645 this version of the Mazda 3 showcases most of the claimed improvements. From a Japanese company which majors on engineering comes the world debut of what they call G-Vectoring Control:  “It varies engine torque to optimise the load on each wheel to indiscernibly provide more precise handling and improved comfort.”
In addition, there have been revisions to the suspension aimed to improve ride comfort, sharpen handling and reduce vibration.  A short-shift six-speed manual gearchange adds to driving enjoyment
What it means is that this still fairly anonymous-looking and modest family hatch nipped nimbly and with surprising aplomb up, down and around some of Britain’s most dramatic terrain.
Pure statistics: This 120 PS engine is credited with 121 mph, 0-62 in 8.9 seconds, combined mpg of 55.4 and CO2 rating 119 g/km. Upgrading to the 165 PS version in similar trim would give you respectively 130 mph, 8.2 seconds, 48.7 mpg and 130 g/km for an extra outlay of nearly £2,000.  Questionable. 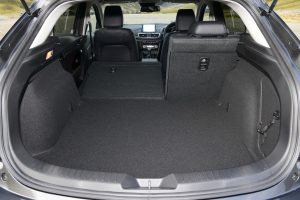 A stint in Mazda’s re-worked 105 PS diesel 1.5 (significantly slower than the 120PS petrol at 115 mph and 11.0 seconds but showing a vastly superior 74.3 mpg and tax-beating 99 g/km) illustrated its flexibility and recently added refinement, but for a price premium of £1,500. And you’d have to face society’s current anti-diesel faction.
Updated sat-nav and infotainment systems work broadly well via a new rotary switch and seven-inch touch-screen combination, but live traffic and weather info is an optional extra. That some colleagues, keeping faith with the onboard navigation, ended up on a private farm track not endearing them to the irritated owner, owed perhaps more to the pre-programming than the system or – heaven forbid – driver error.
Our likes included the colour head-up display as a feature of the Sport Nav trim, which also exclusively includes bigger 18-inch alloys, LED headlights, daytime running lights and “signature rear lights” plus a reversing camera, front and rear parking sensors, a digital speedo and a powerful nine-speaker Bose surround-sound audio system.
Extra-cost options newly include adaptive headlights, lane-keep assist and blind spot monitoring with a rear cross-traffic alert
An electronic parking brake leaves more space for storage as well as a sliding front centre armrest.  New insulation around the cabin must be an improvement but you can still be aware of road noise at high speed.
The boot is above average for its class and is claimed to better that of the Golf.  Notably ample all-round adjustment of the driver’s seat catered for the radically differing statures of me and my lofty co-pilot. A leather-clad steering wheel is now standard.  The new interior echoes the latest and admired Mazda 6.
All should help the Mazda 3 maintain its steady challenge to the big hitters in its category.