Ford Mondeo 2.0 Ti-VCT Hybrid Electric Titanium road test report and review: KEITH WARD has a look at some of the latest technology from Ford.

IT has taken some time, but Ford’s first hybrid vehicle to be produced in Europe is making a glimmer of progress in the UK.
First driving impressions during a recent one-day Press event in the North were good.
But sales here of the petrol-electric Mondeo Hybrid so far are hardly lighting up Ford’s Christmas tree. Since its debut here at the beginning of the year (2015) it has found 370 customers, or less than 2 per cent of the Mondeo total.
The Hybrid is available only as a four-door saloon in classy Titanium trim – automatic lights and wipers and fancy sat-nav as well as dual zone climate, lane-keeping aid, cruise and an eight-inch colour touchscreen control.
The turbocharged petrol engine is a special four-cylinder, 16-valve 2.0-litre known as an Atkinson cycle unit. The simplest explanation offered by Ford is that it can adjust the compression as you drive along.
It outputs 187 PS or 137 kW and is synchronised with an 88 kW electric motor, operating alone or in tandem according to how you drive, and aiming overall to save fuel and clean up exhaust fumes.
Backing them and housed just behind the rear seats (shaving some capacity from the conventional lidded boot) is a hefty lithium-ion battery, maximum output 35 kW. 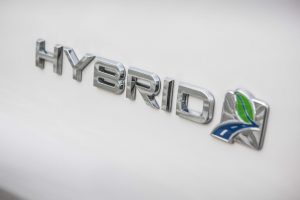 Discreet external badging betrays the Hybrid’s identity. Your surroundings in the cabin are pretty standard except for a dash which can display to the point of distraction a striking array of coloured graphics to tell you what is going on backstage.
Switch-on, via a push-button, is typically silent and take-off under pure electric power (provided your right foot is light enough) produces a quiet whoosh.
Only when you get going and call petrol into play does the Mondeo sound normal. And progress doesn’t need to be sedate. Forget the electric milk-float image. Step on the gas (sorry) and there’s the chortle of a quite sporty exhaust note, a reminder of the claimed performance figure – 0-62 mph in a respectable 9.2 seconds.
One graphic on the dash tells you whether the battery is giving charge or receiving it – the latter typically when you are braking. At one point when I braked quite firmly at traffic lights there was the flash of a congratulatory message – 100 per cent regenerative braking!!
One hybrid fan explained you really had to re-learn how to drive. Forget the gentle manner of A-level anticipation and feather-foot braking to a dignified halt. Stopping heartily is to be kind to the all-important battery.
Despite its weight, the car drives with almost all the aplomb which has come to be associated with a Mondeo, except for a slight heaviness at times in the steering. Gear changes with the CVT auto box go undetected.
And what are you saving by switching to electric-aided motoring? The Hybrid is at its best around town. Our car was recording long-term, by its onboard computer, something under 50 mpg. The official combined figure for the 2.0-litre petrol Hybrid (Ford are among makes who have quickly denied any VW-type “defeat devices”) is 67.3 mpg. That’s exactly the same as for the diesel 2.0 TDCi Mondeo Titanium hatchback.
The diesel puffs out 109 g/km of CO2 and is listed at £23,740. The Hybrid emits a tax-dodging 99 g/km and is priced at £25,295 after government subsidy for green vehicles. On that rough basis you are forking out just over £1,500 to do your bit for the environment.
Rating: