MODERN slants on retro cars have proved quite popular in recent years, Fiat’s incredibly successful 500 being a prime example, so you can’t be too surprised that its new sports car also harks back to the brand’s heritage.
The Fiat 124 Spider is a real cracker and I loved it. Slide into its low seats, and peer out over the long bonnet and it is more than a bit reminiscent of a 1960s sports car, with its long wings stretching out in front of you and the wide sculpted bonnet instantly creating a classic sports car feel.
Fiat’s newcomer though is anything but classic, it’s modern, fast, reliable and most importantly great fun to drive, with a sportingly raspy exhaust note to encourage you to work its 1.4-litre turbocharged engine which rewards the driver with entertainingly lively performance. 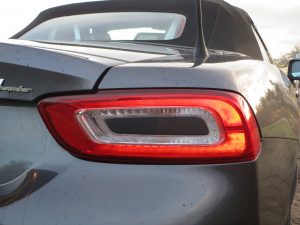 I loved the tan leather upholstery installed in our test car which contrasted nicely with the dark grey paintwork, although I think some of the brighter colours suit the 124 Spider better. The tan leatherwork continues from the seats, onto the door cards and dash fascia too. The interior is perhaps best described as compact, and anyone much over six feet tall is likely to struggle to fit, and there is hardly any storage space in the cabin, apart from a small compartment on the rear bulkhead, where you will also find two cupholders, but reaching the cups while on the move could be a challenge.
So storage space is pretty much limited to the boot, which is big enough for a couple of weekend bags and probably not much else, but let’s face it, you don’t buy a two-seater sports car for its practicality.
The Fiat 124 Spider is closely related to the ever popular Mazda MX-5, and once at the controls, anyone familiar with the MX will feel instantly at home. All the controls, the multi-media display which sits atop the dash and the steering wheel buttons are a straight lift from its Japanese rival, indeed the only real differences are the engine and suspension set-up.
Pricewise, they are similar, although the three-model Fiat line-up starts more expensive than the Mazda at £20,995 on the road, compared the £18,495 asking price of the 1.5i SE MX-5. At the top end of the ranges, the MX-5 costs £23,690 compared to the Fiat’s £24,995.
So it will probably come down to looks as to which car you go for. The Mazda is as common as muck, while for some time the Fiat will be a rarer sight on our roads and therefore more exclusive, and that will be enough to tip the buying decision for some. 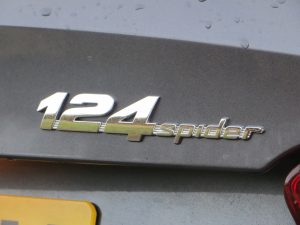 I have yet to drive the smaller-engined MX-5 so can’t really say which is better, but I can assure you that if you buy the Fiat 124 Spider, you are unlikely to be disappointed. The 140bhp engine pulls strongly through the gears, hitting the rev limiter at around 7,500rpm, by which time the exhaust note as on full song. The gearshift is crisp and precise and the brake pedal actually feels as though it’s got some substance to it and is well set-up for heel-and-toeing, which means you can give the throttle a lovely blip on the downshift.
With its rear wheel drive layout, the handling is also excellent, with plenty of grip on dry roads when you turn into a corner at speed, while in the damp, which was 95% of the time during my test, the rear wheels will easily break traction on a roundabout, but the traction control system is always watching over you to make sure things don’t get too out of shape, so there’s plenty of relatively safe fun to be had.
The steering feel is superb and the brakes plenty powerful enough to bring the car to a halt firmly and predictably.
Going topless is easy, simply release a catch on the header rail, push the roof back, and click it into place behind you. It can be done from the driver’s seat, but it’s easier to do it from outside the car. Putting it up is the reverse and can be done without getting out, although I do wish it would put the windows back up once the roof is clamped back into its closed position.
The Fiat 124 Spider, looks great, is fun to drive and cheap enough to run – I returned 36.3mpg over 400 miles of mixed driving conditions.
The only further thing to add is that I didn’t want to give it back, so draw whatever conclusions you wish from that!
Rating:

If you like this, read our review on the Mazda MX-5