THIS estate version of the latest Mk VII Golf is longer, wider and lower than its predecessor and its changed profile gives it a slightly sportier look while its practical virtues remain.

The boot, expandable to 1,620 litres, is 125 litres bigger than before and larger than average for a class which includes the Focus and Astra.  The variable floor can be set at two levels above a basement – itself giving extra storage around the skinny spare wheel as well as a space for the canvas luggage cover when it’s not in use.

Levers inside the high and wide tailgate opening neatly flip down the rear seatbacks, though not completely flat, to extend the cargo floor to 1.6 metres or around five and a half feet. Roof rails and a luggage net are standard. 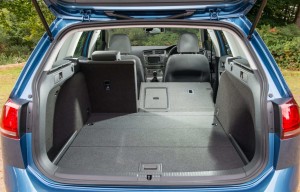 Like the Golf hatch, the latest estate is built at Wolfsburg in Germany, not Mexico as was the previous model. Unlike some estates, it is not modified from the hatch with a new back end but designed separately in tandem with it, insist VW.

Fleet customers account for around 66 per cent of new Golf Estates sold, with 95 per cent diesel-powered.

All include Bluetooth, DAB digital radio with a 5.8-inch touchscreen, an electronic diff lock for improved traction and handling, an automatic post-collision braking system, electric windows, iPod connector and seven airbags.  And all feature VW’s BlueMotion Technology – stop-start engines and battery regeneration when you brake.

(But confusingly the estate is also available for the first time as a distinct “full” BlueMotion model with extra aerodynamics and a unique 110 PS, six-speed manual version of the 1.6-litre diesel with just 87 g/km CO2 and an official 85.6 mpg).

More of the latest big-car tekky toys are filtering down to smaller models. Middle SE trim Golf estates, from £21,030, sport sophisticated ADC automatic distance control from the vehicle in front, also city emergency braking and a driver alert against drowsiness. But air-con is manual, rather than digital climate control. The best-seller is expected to be the 1.6-litre TDI 105 PS five-speed SE tested here, accounting for 43 per cent of total sales.

A plain but tastefully furnished and comfortable cabin features neat switches either side of a central 5.8-inch colour touch-screen. An analogue clock is a nice touch. Welcome extras on our car included sat-nav (£750) and park assist sensors (£600).There are four selectable driving modes, governing throttle response and engine management, to suit your mood or style – normal, sport, individual and eco. A discreet arrow on the dash suggests rather than nags you to change up a gear.

In top fifth, not so well defined on the gate, this engine is pulling around 2,100 revs. Performance is average and at times a sixth gear would have been welcome (see the “full” BlueMotion version mentioned above). But in traditional Golf style, there is a quiet air of solidity and competence.

In more than 500 miles of mixed journeys, exploring different driving modes, the estate returned commendably just over 60 mpg, against its official combined figure of 70-plus, while a 102 g/km CO2 rating qualifies for £20 annual road tax.