Not only is the latest Mk VIII “all-new”, say VW, but it marks the “biggest-ever jump in changes and features” of a model from them “or any other” car brand.

Big claim, especially when even experienced Passat owners may need more than one glance to pick out the newcomer from an identity parade of recent versions of what has become something of a quietly classic design in four-door family saloons and a five-door estate (which marginally outsells the saloon in the UK).

The truth lies in the detail and huge advances in onboard technology.

Get down to the nitty-gritty and you find this Passat is marginally lower, shorter and wider than its immediate predecessor, yet roomier thanks to an extended wheelbase for both passengers and luggage. And markedly lighter by up to 85 kg, or the weight of one average adult male passenger, which helps account for fuel savings claimed at up to 14 per cent. 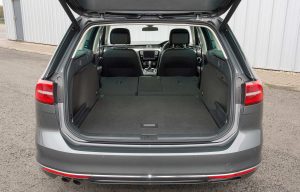 In a 48-strong range priced from £22,215 to just over £37,000, five trim levels include variously as standard such as post-collision braking, adaptive cruise control and multi-choice ride and handling settings which are increasingly common.

(VW point out that a higher trim with more safety features can save you money on insurance).

Heedful that mileage-chomping, outside lane fleet customers account for around 80 per cent of Passat sales, a new trim we tried among the five is SE Business (upwards of £24,010 and £700 above the SE) with a superb multi-adjustable “ergoComfort” driver’s seat and an upgraded “Discover Navigation” system with 6.5-inch colour touchscreen, dash-mounted MP3 compatible CD player, eight-speaker audio and three years’ online access to traffic, weather and navigation updates.

The 1.6 tried in an estate (see details below) tended to growl under acceleration before settling into smooth open-road progress through an excellent six-speed manual gearbox. It was recording a long-term average of 36.5 mpg against an official combined rating of nearly 70. Slightly disappointing was to find the lowered rear seatbacks sloping upward, so not giving the level, slide-in extended cargo platform remembered from earlier Passat estates.

New (to the Passat) optional features include in-car screen connection to the internet via a smartphone wi-fi hotspot, also radar detection of pedestrians to prompt a full emergency stop, failing intervention by the driver. Traffic Jam Assist will brake, accelerate and steer automatically in stop-go traffic, so advancing some way towards the driverless car. New Front Park Assist self-steers the car forward into what seem to be increasingly narrow supermarket bays to give you easier loading of shopping into the boot.

And as one who has managed in his time to jack-knife even a small trailer, I marvelled at Trailer Assist, claimed to be offered uniquely (among cars) by the Passat. Another development of Park Assist, this enabled me with both hands off the wheel to reverse first time a towed trailer smoothly through 90 degrees into a parking bay. It will be even more impressive when a reversing camera is incorporated.

More to come in the Passat pipeline: June will see a diesel BlueMotion claiming 78 mpg on the official combined cycle; in July an Alltrack estate; then a plug-in petrol-electric hybrid GTE in October, with a range of up to 620 miles (or 31 in pure electric mode); also later in the year an Active Info Display with 12.3-inch screen and a head-up facility (first in a VW) to replace the traditional instrument cluster.