LIVING in the snow-prone Pennines and planning a winter weekend among the peaks of the  Lake District, I was comforted by the 4WD capability of this version of the Volvo S90.
It was also good to see it came with a £525 optional Winter Pack – electrically heated windscreen, heated steering wheel and washer nozzles, plus a headlight cleaning system.
And there were the cosy comforts of the second-top Inscription trim including higher-grade soft leather upholstery with plump, individually heated and powered front seats as well as superb LED headlights and front LED foglights with their own sidelong cornering function for those twisting Cumbrian backroads.
The S90 executive saloon, on a similar platform to the XC90 SUV and V90 Estate, comes in a 12-strong range spanning six trim levels. Engine choice is from  a pair of diesels (190 hp D4 or 235 hp D5), a T8 petrol-electric hybrid and a recently added T4 190 hp 2.0-litre petrol (join the queue). Prices are between £33,650 and £57,650. 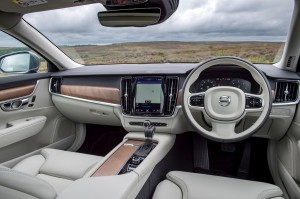 Comfort is the feature most highly rated by surveyed Volvo owners and it’s surely seen at its best in the S90. This is, after all, a brand under Chinese ownership bidding to rub shoulders with European big hitters such as Mercedes, Audi, BMW and Jaguar.
Interior space is generous all round – for leg, head and elbow. Furnishings are high quality with, at the higher end,  extra touches of smart ambient lighting, “luxury floor mats” and a larger 12.3 – inch function display screen on the dash as well as an i-Pad backup in the glovebox.
The boot at a claimed 500 litres may not be as large as those of some rivals, but you reach into it  what seems a long way  – actually 1,140 mm or approaching four feet according to our tape.  And although this is strictly a booted saloon, the rear seatbacks can be lowered hatchback-style at the touch of a button.
The air of an executive lounge was further enhanced by a £3,000 extra on our steed – a 19-speaker, 1,400-watts premium sound system by specialists Bowers and Wilkins.  Ears more expert and sturdier than mine would appreciate its undoubted quality.
It is controlled via Volvo’s so-called Sensus Connect set-up of infotainment, standard on all S90’s, which is impressively multi-faceted when you take the time to explore it, but can be frustrating during the learning process.
Witness the featured voice control option, whose disembodied host seemed ill at ease with the northern vowels of myself or my wife and could end with us each in turn enunciating ever louder as you might with a deaf old relative. End result: exasperation and back to manual control.
Sensus Connect does more reliably access a range of web apps, browses the internet and oversees sat-nav with traffic info and lifetime map updates.
Safety being a watchword with Volvo, all S90’s detect pedestrians, cyclists and “large animals” in your path and take avoiding action, while semi-autonomous drive technology aims at safe steering, power and braking.
On the road, the S90 may not feel exactly fleet of foot but the 235 hp D5 diesel in our test car, as opposed to the 190 hp D4 also available, enjoys Volvo’s new Power Pulse system to combat turbo lag on take-off.  So the sprint to 60 is actually rated at a sprightly 6.7 seconds.  At times, however, there was to detract from this a slight hesitation from the otherwise impressive eight-speed automatic box, which is standard throughout the range..
There’s a choice of dial-up drive mode settings, from Comfort to Sporting. Handling and ride reputedly benefits from another optional extra on our car – Active Four-C Chassis they call it – with special adaptive dampers all round and electronic air suspension at the rear.  A relative snip at £1,500.
That and the other options lifted the price of our car from £43,615 to £51,710.
That 4WD capability? A rather disappointing lack of snow. But we did pull out of a bumpy lay-by strewn with wet leaves, no problem.