Skoda has been making big strides in the UK market in recent years. Motoring writer Keith Ward finds out if the revamped Yeti is abominable or heartwarming.

ANYONE ever spotted the abominable snowman? Plenty have seen the Yeti. Skoda have sold almost 30,000 compact SUV’s of that name in the UK and more than  250,000 worldwide in the last four years.

Now it’s given a facelift outside and in, at the same time divided into two versions. New “urban” Yeti sports body-coloured bumpers, sills and side strips, revised lights and designer creases in its tailgate. Alongside it the Yeti Outdoor is aimed at country weekenders. It gets a rear scuff plate in a mildly butch make-over and a bright frame around its front air intake.

In a slightly muddling mix, you can settle for front-wheel-drive in either Yeti or Yeti Outdoor guise, equally priced at three trim levels starting from £16,600.  Opt for four-wheel-drive and that comes only in Outdoor dress, upwards of £19,580 and topped by a special Laurent and Klement version, upwards of £25,490, with such as fancy-stitched, all-leather upholstery and a £1,630 sat-nav thrown in.

While the 4WD Yeti Outdoor would not pretend to be a serious off-roader in the Land Rover class, in our hands it slithered but kept going across, up and down muddy Cotswold meadows drenched by days of solid rain.

At its heart is a new, lightweight fifth generation Haldex clutch, mounted between the rear wheels, which automatically distributes engine torque front to rear and side to side for maximum grip. One simple button on the dash, standard with top trims or a £105 extra, deploys a series of further off-road aids. 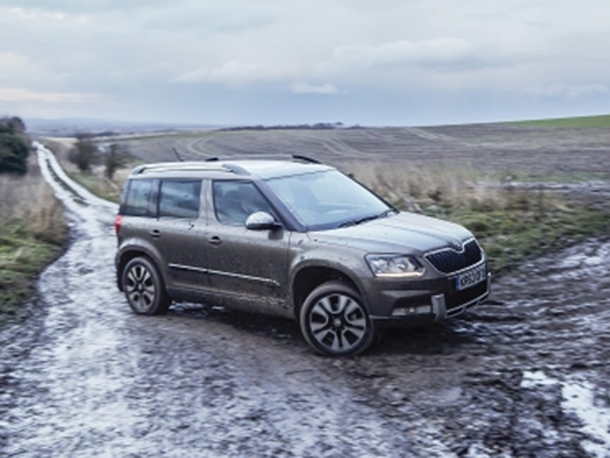 The Yeti’s declared rivals include the Nissan Qashqai, Kia Sportage, Hyundai ix35 and Mitsubishi ASX. The Skoda claims for its boot the biggest cargo capacity at a massive 1,760 litres, but that is with the three rear seats not only tumbled forward but completely removed, which is all a bit fiddly to achieve and assumes you have somewhere to store them. The extended boot floor is uneven, but by our tape exceeds 1.5 metres.
The rear seats can recline and slide as well as tip and they are mounted high, giving passengers a “platform” view.

Skoda enjoyed a good year in 2013, scooping a score of consumer and Press awards as well as the European Rally Championship, while UK sales reached a record annual high of more than 66,000, up by over 23 per cent.  The latest Yeti can only help boost that figure further.