Is space the final frontier? Not for the Skoda Rapid Spaceback! DAVID HOOPER puts one of the new Spaceback models to the test, but how does he get on with the DSG gearbox?

SOME say Space is the final frontier, but for the Skoda Rapid Spaceback – well, it’s just another day in the office!
This week’s test ca 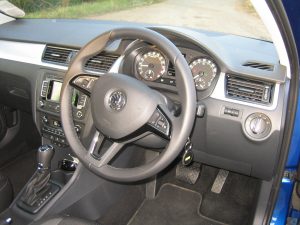 r is the estate version of the Skoda Rapid, and as well as lots of space and practical storage solutions, it is available with a host of optional extras to complement an active lifestyle.
Glance through the brochure and you are really spoilt for choice, with various storage nets, roof bars, bags, bumper protectors, rubber mats, and even a large protective rear seat cover to stop Fido getting hair all over your nice smart seats!
The Skoda Rapid Spaceback range starts from just over £14,000 and includes four trim grades S, GreenLine, SE and Elegance. It is a smart, modern looking car with clean lines and Skoda have retained the distinctive angular design on the tailgate that was first seen on the boot of the saloon version.
Inside there is room for five people, and the model I tested, with its optional Amundsen touchscreen satellite navigation system with DAB radio (£550) also provides a hands-free interface for your telephone and media play 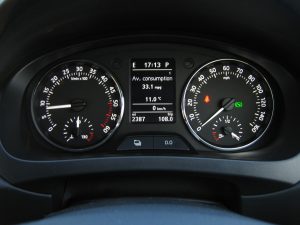 er which you can connect to the system by either a USB socket or a 3mm jack. Controls on the multi-function steering wheel allow you to navigate most of the functions with relative ease – and you can even try out the voice recognition system if you wish.
This SE-spec model is well equipped includes climate control air conditioning, four electric windows and a cruise control system, but there was no auto-dimming rear view mirror, which is increasingly useful these days as headlights become ever brighter.
Power comes from a 1.6-litre TDI diesel engine with 90PS which quietens down nicely as it warms up, and once on the move provides enough punch to enable reasonable progress to be made. Skoda has struck a nice balance between performance and economy with this particular model, with the car’s trip computer recording up to 64.4mpg on some trips. 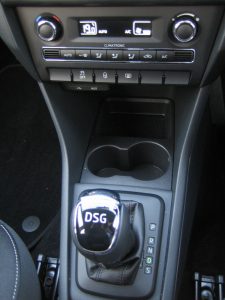 This example was equipped with a seven-speed DSG gearbox which comes with the option of manual control – but we didn’t really get on that well. I found the gearbox snatchy at low speed, especially when trying to park, or creep along in traffic, with the engine and gearbox almost giving the impression of trying to work against each other and the feeling at times as though the car was trying to run away with itself when parking, making it very difficult for the driver to be smooth.  It almost caught me out a couple of times, but fortunately I did manage to complete my appraisal of the car with both bumpers intact.
At the back, there is a generously-proportioned boot for a car of this size, but the load area isn’t flat, with boot floor being several inches lower than the lip which can make getting heavy items in and out that bit more difficult. The rear seats fold down easily in a 60/40 split to increase the Spaceback’s carrying capacity when required to create a deceptively large load area.
To sum up, I liked the Skoda Spaceback, but would personally opt for the manual gearbox over the DSG option I’ve been testing. Not only is it a bit cheaper, its much nicer to drive.