AN all-wheel-drive estate car designed for the big outdoors is the latest offering from SEAT.
The Leon X-PERIENCE is a beefed up version of the very practical ST model launched by the Spanish car maker last year and comes with the latest Haldex four-wheel-drive system also used on the Audi Q3.
Priced from £24,835 to £28,870 the X-PERIENCE is right at the top of the Leon line up and SEAT is positioning it as a halo model alongside the performance oriented Cupra hot hatch.
The X-PERIENCE is being aimed at a niche in the market and is very much a lifestyle model in the same vein as Vauxhall’s Insignia Country Tourer, the Volvo V40 Cross Country and Subaru’s new Outback.
These are cars which can go the extra mile when it comes to handling tougher conditions and the drive system in the Leon X-PERIENCE certainly makes a fist of soft roading.
Wit 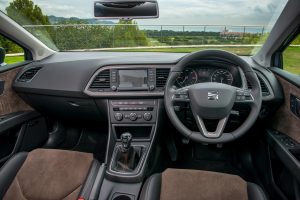 h a rugged approach to its styling it has added protection over the wheel arches, robust bumpers and sits more than an inch higher than the regular ST estate boosting its ground clearance.
It looks the part and comes with a choice of two gutsy 2.0-litre diesel engines developing either 150 or 184ps.
The latter is available only with a DSG semi-automatic gearbox and comes in the top specification SE Technology version of the X-PERIENCE where it is a very impressive performer.
Although it is 100kg heavier than the equivalent Leon ST it is actually the quickest of all the Leons (with the exception of the Cupra) and can manage 0-60 in 7.1 seconds thanks to the added traction.
The 4Drive set up, as SEAT is calling it, is a smart 4×4 system which kicks in only when necessary. In regular use the X-PERIENCE has all its drive channelled through the front wheels and that, coupled to stop/start, makes it impressively economical.
SEAT is claiming an official fuel figure of 57.6mpg with emissions of 129g/km for both the DSG model and the 150ps six speed manual. On the CO2 front that is low for a car of this size with four-wheel-drive.
On our runs through the Forest of Dean in Gloucestershire we managed to average 43.2 in the DSG X-PERIENCE and 53.4mpg from the manual. Neither is lacking in urge and although the bigger engine has the edge both are more than adequate.
The manual can tow up to 2.0 tonnes and the DSG can manage 1.6 tonnes and in keeping with its leisure image all versions of the Leon X-PERIENCE come with roof rails and plenty of boot space which ranges from 587 to 1,670 litres.
For a car which is at the heavy duty end of the estate market it is surprisingly plush inside with the two top specification models we tried having alcantara door panels, leather bolsters in the seats and a nicely stitched leather steering wheel complete with a distinctive XP logo.
Sat nav is standard at this level and so are LED headlamps but all versions of the X-PERIENCE come with the likes of climate control, a full colour touchscreen and heated door mirrors.
Behind the scenes the X-PERIENCE is fitted with extra software which can help drivers get the best economy from the car via a tell-tale display on the touchscreen and there are other programmes designed to assist off-road activity.
It is a very well equipped and accommodating vehicle that is fit for purpose either heading out on the fells or around town.
Options such as a panoramic sunroof and full leather trim can take the price over £30,000 but even at that point the Leon X-PERIENCE remains competitive.
With the bonus of four-wheel-drive it’s an estate car which makes a lot of sense and can cope with plenty of rough and tumble making it a fine all rounder.
Rating:

If you like this, have you also read our SEAT Leon Cupra road test