The New Land Rover Discovery Sport goes on sale at the end of January, DAVID HOOPER has a look at the new car and where it fits into the Land Rover range.

THE new Land Rover Discovery Sport goes on sale on January 22 and is certain to attract yet more buyers to this iconic British brand.

The venerable Freelander is now no more, and this new model sits below the full-sized Discovery in the range. 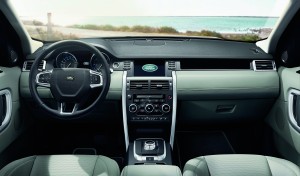 It’s a compact 4×4 measuring in at less than 4.5m, yet comes with plenty of space, with 5+2 seating – and of course, class leading off-road abilities – but then with a Land Rover badge on the bonnet, surely you’d expect nothing less.

The Discovery Sport shares its platform with the Range Rover Evoque, although the company admits that it has been extended by 81mm.

The 0-62mph times come in at 8.4 seconts for the automatic model and 9.4 seconds for the six-speed manual.

Inside, the occupants will be treated to the stadium seating for which Land Rovers are well known and appreciated, ensuring that everyone has a good view through the windows.

Later next year a two-wheel-drive model will be added to the range.

Prices initially start at around £32,000 when the car goes on sale, but the two-wheel-drive version will be a little cheaper, at around £30,000.