New 2018 Mazda MX-5 road test report and review: DAVID HOOPER travels to Northern Ireland to put the latest MX-5 through its paces on roads which are no laughing matter!

HANDS up if you always thought the Mazda MX-5 was a bit of girls’ car? Not quite fast enough to be a proper sports car? If that was you, then it’s time to think again!
You see, Mazda listens to its public, and the new MX-5 has been given a substantial power boost and now packs a 184PS punch – and trust me, it’s enough to keep the testosterone-fuelled reversed baseball cap brigade fully entertained.
The power increase transforms the world’s favourite sports car and gives it the sharp edge some insisted it was missing, putting the zzoooom into the zoom-zoom! For the petrolheads, the torque is also up to 205Nm, which if you’re not in a particularly racy mood, means the car is delightfully pliable in fourth and fifth gears, without having to send the rev counter around to the 7,500 red line. 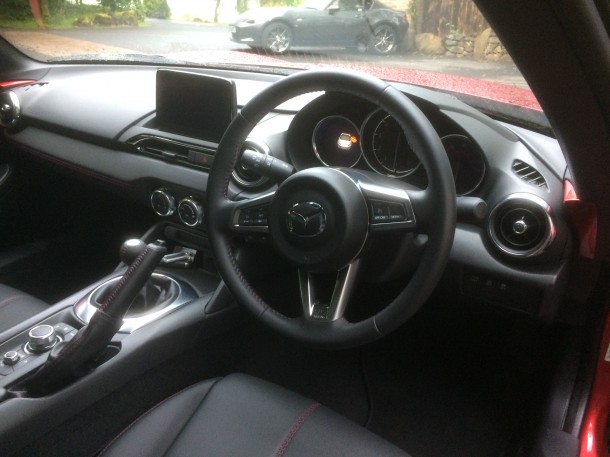 The UK is the biggest market in Europe for the MX-5, and with the 0-62mph time now reduced to 6.5 seconds (0.8 seconds quicker) there’s little doubt it will be flying out of the showrooms even faster than before. The 1.5-litre engine option is also still available with 132PS, and there’s an automatic gearbox offered too.
I travelled to Northern Ireland to put the car through its paces on some delightfully quiet and picturesque country rounds, both North and South of the border, and loved every minute of it.
Irish roads are no laughing matter with the road surface being far less than perfect, with some quite severe undulations and imperfections, but the suspension setup of the MX-5 never failed to impress. The Soul Red Metallic GT Sports Nav+ model pictured boasts sports suspension with Bilstein shocks, a limited slip rear diff and a strut brace to stiffen up the chassis. It’s not overly hard for a sports car and is compliant enough to soak up the worst of the bumps and craters that littered our route, and even after three hours at the wheel, I was still entranced by this little gem of a motor car.
The steering actually feels connected to the front wheels, not always the case these days, and the strong brakes never showed a hint of fade, even after some extensive use on twisty mountain passes.
The interior has precious little space, even for a sunglasses case, but the boot is big enough for a weekend away if the fancy takes you, and the seats are comfortable, even after a long drive.
During the launch exercise, I tried both the traditional soft-top convertible, and the RF version, with its clever folding roof, but due to plenty of wind noise when the RF is open to the elements, the soft-top would definitely be my choice – it’s much quieter at speed and comes with a built-in wind-deflector between the head rests. It’s surprisingly weather resistant too – even with the Emerald Isle’s inclement weather doing its best to dampen our spirits, so long as the car was moving at 50mph plus, my driving partner and I stayed surprisingly dry and warm inside the car. We only had to resort to the hood when we got held up in a town as the Heavens opened, but putting the roof up took a matter of seconds without having to get out of the car. Simply release a catch, pull the hood into place and latch it onto the header rail.
The MX-5 was always intended to be an affordable sports car. Today the entry level car costs £18,995, only £4,500 more than it did when it first went on sale 28 years ago, and for me, it’s still one of the best new cars you can buy today and is an absolute pleasure to drive, which is why it gets my top rating.
Rating: