MITSUBISHI is a relatively small player on the current UK car scene, a minnow selling a modest 1,000 vehicles a month, so less than a half of one percent of the market and only eight per cent of the throughput here of its biggest fellow-Japanese rival, Nissan.  You don’t see many Mitsubishis around.
Yet in its early days 40 years ago, under the reins of the young Colt Car Company and that importer’s astute ex-BMW marketeers, it was hailed as the most profitable automotive business of any on these shores.  The company scores high on reliability and safety.  And it has long enjoyed a status for 4WD, inherited by the Shogun and Outlander.
The ASX is a compact five-door, five-seat crossover between a hatch and an SUV, nearest in size to the Nissan Qashqai. It is expected to sell 4,500 in the UK this year (2014) through 110 dealerships.
“We are planning to increase our ASX sales by more than any other model”, says Lance Bradley, UK boss of Mitsubishi. “In the past we have been hampered by an unfavourable exchange rate. We are looking to grow by 50 per cent, maybe more than that”.
A seven-strong range starts a tad under £15,000, offers a choice of one 1.6 petrol or two diesel engines, rises through three trim levels and is topped by the powerful and well-equipped 2.2 diesel automatic with 4WD at £23,899, tested here. This engine is also found in the new Outlander.
Normal traction is to the front wheels only.  Also offered with a six-speed manual 1.8 diesel engine, the electronically controlled all-wheel system switches as much as 50 per cent torque to the rear wheels at the push of a button, while a further lock mode can up that by half as much again to cope with even poorer conditions. Don’t expect the renowned off-road strength of a Shogun, though.
Still chunky in SUV style, the latest ASX has a softer, more rounded front than before, while a double bulge in the bonnet makes it easier to gauge in tight corners. It’s a practical load-carrier. Under the boot floor is a deep, 26-litre tray and within each rear wing a deep pocket. The rear seat gives good leg if limited head room.  It splits 50-50 to fold flat and more than double the cargo volume.
For 2014 the ASX enjoys spec improvements at all levels, including Bluetooth hands-free. The top ASX 4 gets an impressive panoramic glass roof, with night-time LED “mood” lighting. That feature adds to its reversing camera, leather upholstery, sat-nav, that 4WD and – new this year – dual-mode auto transmission with paddle controls behind the steering wheel.
While generally comfortable, there is some body sway on corners.  The driver’s view is hampered by thick screen pillars and limited through the rear screen, though the reversing camera helps in this respect.  The push-start and info buttons are hidden behind the steering wheel and the three heat-vent controls tucked low down are difficult to see at a glance.
There’s an excellent touch screen but the menu for the audio is complex. And on an inspiring two-day expedition into Northumberland’s wild Roman Wall country, one local destination accepted by the sat-nav prompted instructions not remotely connected to the road we were on. You could not help feeling that the Emperor Hadrian’s legions got around to all corners of Europe with more ease and accuracy.
The formidable 148-bhp diesel tended to linger and rumble along at low revs unless you kicked down on the auto gearbox, but there was no denying its overall efficiency, returning a remarkable near-50 mpg, exceeding the usually optimistic official rating, during over 500 miles of mixed motoring. 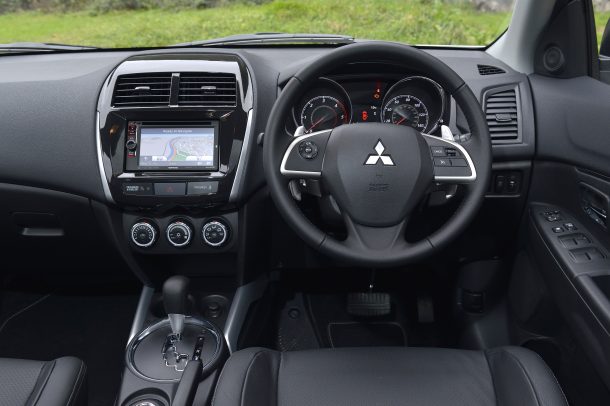