IN what Mazda call their “most intense period of activity ever” we have seen this year five new or revised models launched in the UK: the 2 and the 6, plus CX-5, CX-3 and MX-5, so that the Japanese maker now claims the “youngest model line-up of any manufacturer”.

They were showcased at a recent regional media driving day.

Youth is paying dividends in terms of Mazda sales here: up by a steady 20 per cent a year since 2012, far outpacing the overall market, to head back to their hey-day level of 50,000 customers annually. 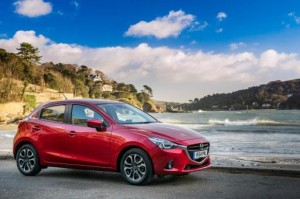 The fourth-generation Mazda 2 is most popular with UK motorists. It owes nothing to its predecessor’s twinning to the Spanish-built Ford Fiesta, being independently engineered in Japan and built for the European market in Thailand.

Incidentally, by taking this route of an ultra-low compression ratio, the diesel “easily meets” the latest Euro VI emission regulations without recourse to expensive after-treatment systems – or to cheating devices, Mazda UK state pointedly, in light of the VW scandal.

The attractive, sculpted body of the new 2 five-door hatchback, catching the light at many different angles, is longer than the previous generation to comfortably seat four adults, but shows a seven per cent reduction in weight, contributing to official combined figures of between 56.5 and 83.1 mpg. CO2 emissions are from 89 to 117 g/km.

We tried the 115 PS petrol which drives with some verve through its six-speed box (0-62 in 8.7 seconds). Exploiting that might account for our onboard trip computer reading of 32.2 mpg, against its official combined rating of 56.5.

Sport Nav trim raises the price to just under £16,000, including climate control, sat-nav, lane departure warning, self-braking in city traffic and auto lights and wipers. A £400 optional Safety Pack exclusive to the 115 PS Sport Nav includes a rear cross-traffic alert and – claimed to be a first in this sector of the market – a head-up display of driving date in the windscreen.

Point losers in the 2 are thick, rather obstructive middle B-pillars between front and rear doors. And while the boot is deep, there’s a step across it when the rear seats are lowered.

More practical in this respect is the new, higher-stance CX-3 compact SUV, based on the 2 but 180 kg heavier, 215 mm longer and 40 mm taller. It also is a good-looker. In this you get a near-flat extended deck and a cargo capacity of up to 1,197 litres against the 2’s maximum volume of 950, according to Mazda’s own figures.

Our 120 PS petrol CX-3, again in top Sport Nav trim, was enhanced by snazzy seats in leather and suede, an £800 option which, together with special red metallic body paint (£660) helped raise the final price to just under £22,000. As in the 2, finish and fittings are good quality.

On the road, the CX-3 rides and handles well. As in the 2 hatch, screen info is controlled efficiently from a rotary switch between the front seats. From this bigger engine, mpg was a not bad 39 – did the CX-3 encourage calmer driving than the Mazda 2?