Lexus NX 300h Premier Auto road test report review: A luxurious hybrid SUV with a Big Red Nose which is a delight to drive, but is its fuel consumption laughable? DAVID HOOPER has been enjoying the fabulous looking new Lexus NX 300h.

AS regular readers will know, this is the second of our recent test cars to arrive sporting a Big Red Nose – and it’s all to mark Toyota’s sponsorship of this year’s Red Nose Day. The Comic Relief charity smashed through the £1-billion landmark on Friday night – surely a fitting way to mark its 30th anniversary of raising money to help good causes across the world.
Lexus NX buyers however, won’t be in need of charitable support, with prices for this most striking of cars starting from just under £30,000. I think the new Lexus LX is one of the most dramatic looking cars to appear on the market for some time, the angular styling, intriguing lighting detail and interesting sexy curves make 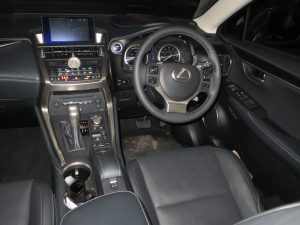 this car stand out from the crowd and turned a few heads during my at the wheel. There are five trim levels to choose from and the interior of the new Lexus NX will accommodate five adults, although the boot space may struggle to swallow all of their luggage because of space taken up by the hybrid technology, which may limit its practicality as a family car for holidays.
The interior of the Lexus NX is a gadget-lover’s delight with enough buttons and switches to keep a spaceship captain entertained. The energy monitor makes fascinating watching as you drive along as the power switches from petrol engine to electric motor and back again.
The technology has obviously improved in the last few years as this latest hybrid model is capable of travelling much further on its battery-power alone than used to be the case. Sitting just in front of the energy monitor on top of the dash there is a smart analogue clock. Controls for the air conditioning and heating which include buttons for the electric seats, then you have the CD and music system. 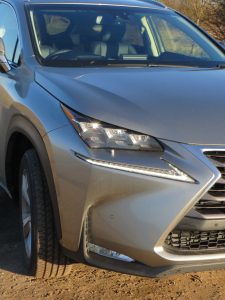 The gear selector offers the choice of sport mode and manual gear controls. Different drive modes are selectable and the driver can choose between eco, normal or sport settings. A lock button for the electric vehicle mode automatically disengages as the battery pack becomes depleted. A touch screen mouse system operates the screen which is home to the satnav TV controls, telephone and radio. The dials on the dashboard change depending which drive mode is selected. For example, when sport mode is selected the dial transforms itself into a standard rev counter display, rather than an economy metre in its normal setting.
The steering wheel is home to multifunction buttons which allow the driver to control many of the car’s systems including the range of the radar cruise control. More switches to the right of the driver control the automatic headlights, parking system, heated steering wheel and automatic boot opening switch, which lets you open the boot without having to get out of the car.
The Lexus NX is a very comfortable luxury car to drive but the batteries and general clutter of the hybrid car also add considerable weight to the entire package. This means that despite all the clever hybrid technology, in normal use the car only managed to achieve around 30 to 33mpg over my test of around 500 miles, which is somewhat different to the 53mpg-plus figures that the manufacturer claims, but bear in mind that in normal driving conditions out of town, the Lexus NX, as with any hybrid, is relying primarily on its 2.4-litre petrol engine, so there is little wonder that the MPG figure is as low as it is.
That said, it is better than the petrol engine alone could achieve due to the fact that in traffic at relatively low speeds, the car does utilise its electric ability to keep CO2 emissions down and can avoid using petrol for several minutes at a time. The Lexus NX looks great, is sumptiously luxurious and easy to live with and it’s a bit of a head turner!