MEET the Lexus IS 300h F-Sport Auto. The “h” stands for hybrid, which to most people means a car which is “green” – kind to the planet, but not very exciting to drive.
That may be the case for many, but this Lexus comes with the F Sport badge – which means it’s a bit more than that – in fact, it’s a lot more than that.
F-Sport is the performance arm of Lexus – and the Japanese company knows how to make a decent performance car – and hybrid or not, be in no doubt this is one of those cars.
But first, a word about the styling – it looks stunning – how could you not like the way this car looks. It’s modern, dramatic, possibly aggressive, at the front in particular, but very smart from whichever angle you admire it, aided by the F-Sport spec which adds sporty bumpers, side skirts, steering wheel, scuff plates, 18in F-Sport designed alloys and the like.
Open the door and you are met by perforated leather sports seats which will either heat or cool you, depending on the outside temperatures. 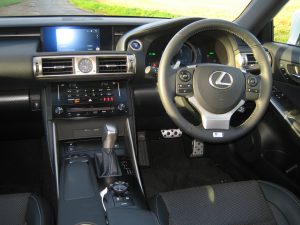 The dash is very clever too. It has a central dial which shows how economically you are driving when the Eco setting is selected, but this can change if you select the Normal or Sport settings, the latter bringing up a blue dial with a needle. One of the buttons on the multi-function steering wheel brings up another menu on the dash in front of the driver, and the main dial slides neatly to the right to make room for it, all the displays at the sides of the main dial either disappear or are moved somewhere else, and can be used to show various displays, sat-nav, radio, drivetrain activity, telephone, and so on.
The central display at the top of the dash is home to the sat nav system and all the car’s control interfaces, and can also show what the hybrid powertrain is doing, whether the petrol engine is driving the car, the electric motor, or a combination of the two, with arrows and colours changing direction as the power flows.
To the left of the central console is a little wrist rest, and a rectangular joystick which is used to navigate around the main display on the screen, just you like you would use a mouse on a computer. It may all sound complicated, but once you spend a bit of time with the car, it’s actually quite intuitive to use and the various displays can relate lots of information. 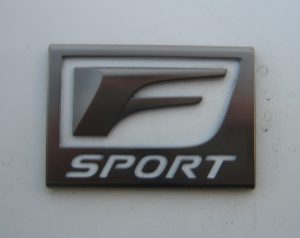 Another nice touch are the electrostatic switches for the temperature settings which can either touch or slide up and down to adjust the car’s interior temperature choices.
The interior then, is as plush as it comes, and cutting edge in terms of technology and displays, and comes with every toy you can think of, but perhaps it’s what’s under the bonnet that makes this car so intriguing.
It may be a “green” hybrid, and it has a C02 figure of just 109g/km, yet it will still despatch the benchmark 0-62mph spring in a mere 8.3 seconds on its way to a top speed of 125mph! Not bad for a hybrid.
Under the bonnet is a 2.4-litre four-cylinder petrol engine with 178bhp, which combines with an electric motor which creates a further 141bhp. They can work, separately, or together, depending upon the demands of the car, so it will run either as an ordinary car, on its petrol engine, or when moving slowly, up to around 30mph, as an electric vehicle. The battery for the electric motor is recharged when the car is coasting, braking, or if the driver lifts off the throttle. The switch between the two is hardly ever noticeable most of the time and the technology works brilliantly, with power being delivered to the rear wheels via an electric CVT transmission.
The car is firmly sprung and beautifully balanced, with sportingly sharp steering responses, making it an absolute delight to drive in just about all circumstances, but the economy is not as good as you might expect from a hybrid.
Despite claims of 60.1mpg on the official combined cycle, during my busy week with the car which included every type of driving, it returned an average of 44.9mpg over a distance of 450 miles, which for a 2.4-litre petrol engine and a heavy battery in the back, isn’t bad, but still some way off the figures some of the latest diesels can achieve without all the complications of hybrid technology.
Food for thought, but the Lexus IS 300h F-Sport is a as impressive to drive as it is to look at – and the £36,100 asking price represents a lot of car for the money.