Kia is confident of the build quality of its c’eed. So confident it gives it a seven-year warranty. Motoring writer Keith Ward sees if it drives as well.

KIA celebrated annual record sales of 72,090 in the UK last year – so more than doubled in five years – and predict a further boost to 75,000 in 2014, with the Sportage  SUV and cee’d models continuing to lead the way. Factory production in the first quarter of 2014 was up by around 10 per cent to meet increasing global demand.

The oddly named c’eed tried here is closely related to the Hyundai i30, with which it shares a corporate platform, engines and technology, but offers an industry-best  seven-year warranty against the Hyundai’s five. 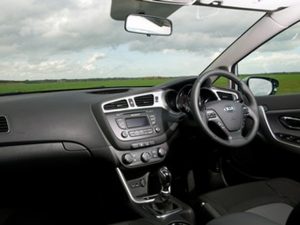 Together this Korean pair, designed and developed and built in Europe, present an increasing challenge on the home patch of traditional front runners such as the Ford Focus, VW Golf and Vauxhall Astra.

Sportswagon estate and three-door pro_cee’d coupe versions have sprouted from the original c’eed, but the five-door hatch now runs in revised form to 17 versions, covering four engines and four grades of trim at prices between £14,400 and £23,800.

Our sample for test was the 1.6 petrol GDi six-speed manual in second lowest or ‘2’ trim at just over £17,000.  An already generous basic package includes (manual) air-con, six-speaker iPod-compatible audio with Bluetooth connectivity, six airbags and a cooled glovebox.

Both the  glovebox and a central cubby between the front seats are notably roomy.

Forsake the centre rear seat and a pull-down armrest doubles as a tray and drinks holder.  There is good head and leg room all-round, enough to accommodate four fairly lanky adults.

Against that, the boot is shorter than average, but wide and the floor lifts up in sections to reveal compartmentalised oddments trays for extra storage.  Folding the rear seats is a fussy two-stage affair, but the result is a flat floor and a space enlarged to above-average in this class. 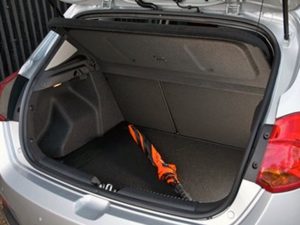 On the road, Kia’s latest aluminium 1.6 Gamma direct-injection petrol engine gets you to 60 in under 10 seconds with little fuss or noise, so not intruding into a well insulated cabin. Don’t expect Golf or Focus optimum levels of handling, but the c’eed chassis, with fully independent rear suspension, now sits wider and lower with a body 50 per cent stiffer.  And the variable assistance Flex Steer system allows three settings, of which I preferred Sport for driving enjoyment.

Eco features on all versions of the cee’d include low rolling resistance tyres and, with manual gearboxes, all six-speed,  a shift indicator.

The ISG stop-start system as standard no doubt contributed to a pleasing if not startling mpg figure of just under 46 in a varied week’s motoring. To better that, you would opt for one of the diesels. With CO2 of 124 g/km from our petrol unit, you get a free VED disc the first year, then £105.

As a further aid to long term economy, there’s that seven-year warranty, plus various servicing plans assuring fixed costs for three or five years.  Like the warranty, they are transferrable to a new owner should you sell on.