Honda HR-V Sport 1.5 road test review: WHEN people spend big lumps of their hard-earned cash on a new car, I suspect the thing they want most is reliability – and few would argue that buying a Honda will certainly tick that particular box.
Always near the top of the reliability tables which are generally dominated by Japanese manufacturers, the company has won a hard-earned reputation for building robust, reliable cars – and motorcycles for that matter. 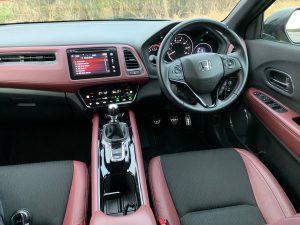 I’ve always found with Hondas that they just “feel right”. It’s something that’s hard to put your finger on, but when you get into a car, adjust the seat, steering column and mirrors to your preference, and a Honda just seems to fit around you, while some other cars take an age to get completely comfortable in. It’s hard to pinpoint exactly what it is . . . it just is!
Our test car this week is the Sport version of the HR-V, a mid-sized SUV which comes with five comfortable seats, bags of equipment and a generously sized boot to accommodate all the family clutter.
Under the bonnet lives a 1.5 litre turbo-charged engine borrowed from the Civic Sport which can be combined with a slick six-speed manual gearbox, or the latest CVT if you don’t want to have to change gears. It provides enjoyably lively performance through a very direct six-speed gearbox and the front wheels, giving this petrol-powered machine a rather surprising turn of speed, with the 0-62mph sprint being completed in just 7.8 seconds and offering a potential top speed of 134mph.
The HR-V Sport benefits from uprated performance dampers, revised suspension and specially tuned steering to give the car a sportier feel. On the road, the HR-V Sport feels even quicker than its official figures suggest, and despite its tall stance, it handles very competently, although there is a bit of body roll to get used to through the tighter bends. 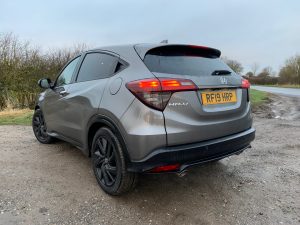 You could be forgiven for thinking that with such a lively nature, the fuel consumption will not be that great, but with a well-turned petrol engine, during my few days with the car which saw us cover more than 500 miles in a busy week of motoring – and tackling some pretty adverse weather conditions on the higher bits of the M62 – it returned 44mpg overall, which I thought was excellent.
Open the door, and the choice of upholstery colours is the first thing that struck me – right between the eyes – with its wine-red and black Colour scheme, but I did get used to it and actually quite liked it, and it certainly makes the car stand out from the rest of the range!
The interior is well presented, with logically positioned controls and clear instrumentation, but other than the cup holders between the two seats, there was nowhere to put your mobile phone – or at least that’s what I thought until I found the space behind the centre console near the floor which was home to a little tray and an array of USB charging points. Once plugged in to charge, the phone was out of sight, which is perhaps a good thing while you’re driving, but I also forgot to take it with me on a couple of occasions when I left the car which was definitely not so good – a case of out of sight, out of mind.
Overall, I liked the HR-V Sport, I felt at home in it and enjoyed its pure driveability, which despite being mainly family transport, also managed to put a smile on my face from time to time, which is never a bad thing, and with a reasonable price point, it makes a sensible, and of course reliable, proposition and in my view is well worthy of consideration.
Any remaining doubts should be covered by Honda’s three year, 90,000-mile warranty!

If you like this, read our review on the Honda Civic Type-R