THE Audi A1 range has been a success story for the German manufacturer, and this “citycarver” model is an addition which will no doubt be another hit with townsfolk!
With a raised ride height to give a better view of the goings on around you, protective plastic mouldings around the wheel arches to defend the paintwork against runaway supermarket trolleys or gate posts and stylish design features front and rear, the citycarver is trendy little car which won’t find it hard to win new friends. 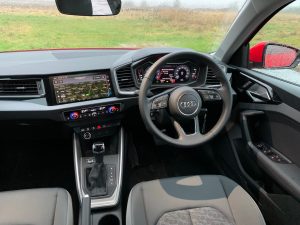 These “city” cars aren’t a new concept, but this little offering from Audi certainly moves the game upmarket in terms of style and quality. Finished in Misano Red metallic with Granite grey novum cloth, it looks and feels premium.
Inside you’ll find the familiar Audi good looks and the latest smattering of technology to make busy lives that bit easier. I loved the pad in the centre console which charges your phone without having to plug it in, and this is the first car I’ve reviewed which has an Apple CarPlay system which works wirelessly, which combined with the charging pad, is brilliant. The future is here!
Despite its diminutive size, the Audi A1 citycarver is packed with plenty of the latest tech, including cruise control, parking sensors all round, a rear camera, and an excellent sat nav system which you won’t find in many far more expensive rivals, which can show the Google earth view of your surroundings on a large screen in the centre of the dash. That screen also controls radio and telephone functionality – the latter being impressively clear while on the move, with little ambient noise in the car being heard by the person with whom you are speaking. 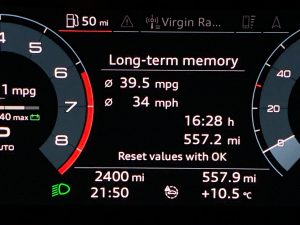 Under the bonnet is a three-cylinder 1.0-litre engine, allied with an automatic gearbox, which makes coping with the city traffic a breeze, while a Stop/Start turns the engine off when you find yourself in a jam. The 118PS engine is quick enough for this type of car, and is capable of returning diesel-like economy on a steady motorway run. I saw up to 45mpg on a run, and around 35mpg in town driving.
Where its small in size, it’s big on quality, and on the road its surprisingly quiet with very little wind or road noise finding its way into the cabin. Its seats are also very comfortable, and heated – lovely on cold wintery mornings.
It drives very well too, and although its only front wheel drive and not a quattro, it rides and handles well and feels very competent at all times.
The Audi A1 citycarver is priced at £22,695, with our test car costing £28,035 as tested with the addition a few options including the Technology pack and the Comfort and Sound pack which together add more than £3,000 to the car’s asking price, although as with any Audi, ticking a few of the options can escalate the invoice price quite quickly!
The citycarver is a likeable little car, and something different – and who knows, those plastic trims may save you an expensive paint repair!

If you like this, but need something larger, read our review on the Audi A4 allroad