HERE are Fiat cashing in further on the huge success of the original little retro-styled three-door 500 model with yet another variant. 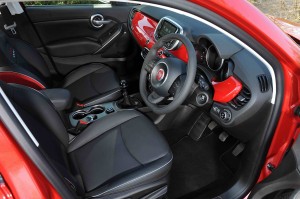 It stands a good 700 mm or 28 inches longer than the original 500 and 115 mm or four and a half inches taller. It is also slightly longer although not quite as tall as the mini-MPV 500L, but shorter as well as lower than the seven-seater MPW. Sort that lot out.

Kate McLaren, head of Brand Fiat UK, says her target customers for the 500X are “stylish adventurers”, younger than for the 500L family car. She admits prices starting at £14,595 and topping out at nearly £26,000 are “slightly higher” than mainstream competitors (Mini Countryman, Vauxhall Mokka, Nissan Juke, Renault Captur) but reflect “superior specification”. And the 500X is expected by independent trade experts to hold more of its original value after three years or 30,000 miles, surely unexpected in a Fiat (speaking as a former owner).

Bernardelli reckons that, tempted by Fiat’s friendly finance deals, 10 per cent of existing owners of the 500, some 3,000 customers, will this year switch to a 500X. As many as 80 per cent of Fiat 500 customers opt for a PCP contract package.

You get the impression that the 500X is aimed primarily at keeping the image of the 500 bubbling in the mind of the buying public rather than offering something radically different.
But it does carry some of the latest techno toys in infotainment and links to mobile phones as well as an interesting nine-speed automatic unique in this class.

Prepare to be bamboozled in the showroom. The 500X range will by September be 25-strong (10 initially) and is billed as “one car, two souls”. There’s a City Look, with three trim options, and a hunkier Off Road Look (masking both two and four driven wheels) with two trim options. Add three petrol engines (110, 140 or 170 hp) and three diesel (95, 120 or 140 hp) mated to any of four transmissions. Then a dozen body colours and eight packs of optional extras to choose from.

In appearance the 500X is pleasantly chunky, with a distinctive bonnet and headlight assembly. You sit high, even an inch or so higher again in 4WD versions. The dash retains retro echoes of the 500 original, but instrument display, steering wheel and switchgear are new, as is a central touchscreen.

There’s seating meant for five, rear passengers enjoying a good six inches of kneeroom given average occupants. The rear backrests divide and fold into an upward-sloping extension of the boot floor to a length exceeding four feet (1,260 mm) on our tape and expanding cargo volume from 350 to 1,000 litres.

On short road routes we tried what are expected to be two of the best sellers, both in second-up Pop Star trim and with This adds 17-inch alloys, automatic climate control, rear parking sensors and front fogs to such as cruise control and all-electric windows from the basic Pop trim.

In a brief off-road foray, in conditions too dry to be a real test, a 2.0-litre, 140 hp diesel MultiJet 4WD with that 9-speed auto dealt well enough with ruts, boulders and slopes and has the pedigree of tenacious little Fiat off-roaders behind it. But in top Cross Plus trim this small car is priced at nearly £26,000. In this case X may mark a painful spot for your pocket.