IT’S not often a Norse god gets involved in the design of a new car but that’s what has happened at Volvo with the new XC90 SUV.
Seldom has a car had such a commanding presence on the road and its striking looks are set off with daytime running lights in the shape of the hammer of Thor.
The XC90 is a giant of a car, 16ft 3ins long, 7ft wide and 5ft 10ins high with seven full sized seats and a boot no smaller than that of a family hatchback.
It is a landmark vehicle for Volvo – the first entirely new model the Swedish car maker has developed since its takeover from Ford by Chinese company Geely in 2010.
Styled to the highest order the XC90 takes Volvo into the premium market and it is good enough to stand alongside the likes of a Range Rover, the Audi Q7 and BMW’s X5.
Although four-wheel-drive the XC90 is really a 4×4 for the open road and it uses Volvo’s latest generation of fuel efficient four cylinder Drive-E petrol and diesel engines first seen in the S60 saloon two years ago.
The XC90 is arriving with a T6 high powered petrol engine boosted to 320bhp which makes it second only to the Mercedes AMG A45 in terms of specific power for a 2.0-litre.
There’s also a D5 diesel which Volvo claims is good for an average of almost 50mpg and later in the year a T8 plug-in hybrid with emissions of just 49g/km will be joining the line up.
The D5 is priced from £45,750, the T6 from £49,205 and initially the XC90 comes in two trim levels topping out at £53,200.
R-Design versions with sportier trim will be available in September priced from £49,285 and the T8 will cost from £59,955 rising to £63,705.
Compared to the alternatives Volvo is making the XC90 very competitive, especially on the company car front where the tax rate for the D5 is 27 per cent and 30 per cent for the T6.
Both engines perform well in the XC90’s two-tonne frame with the 225bhp diesel achieving 0 to 60 in 7.4 seconds on its way to a maximum of 137mph while the T6 has an acceleration time of 6.1 seconds and tops out at 143mph.
For such a large vehicle the ride is exceptional and while air suspension and a multi-mode drive control are options, it holds the road with great composure even in basic set up.
Body roll is minimal when cornering and the steering is nicely weighted with a precise feel.
With the drive control system fitted, sports mode unleashes plenty of venom especially in the T6 and the £395 option also gives the choice of configuring the vehicle for rough terrain or eco driving. 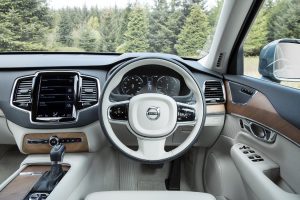 We managed to record an average of 30mpg in the T6, not far off the official 36.7 fuel figure while the D5 showed 34mpg on the trip computer over a similar route. Emissions for the T6 are 179g/km while the diesel is rated at 149g/km which is an official fuel return of 49.6mpg.
Both are fitted with 19-inch wheels as standard and are smooth-shifting eight speed autos with an electronic parking brake and an unusually shaped starter control on the centre console which fires the engine by turning it to the right.
The starter is one of an array of clutter-free features which make the XC90 very modern, very different and very upmarket.
The interior feels as expansive as the rest of the car and it is styled with a luxury feel that is minimalist on the design front.
Controls on the dash are few. There are just eight buttons ranging from one to open the glovebox to others for the heated front and rear screens and the hazard warning lights.
All other functions are controlled from a nine-inch tablet-shaped touchscreen while ahead of the driver is a TFT instrument panel.
Sat nav and leather upholstery are standard and a head up display, which not only shows the vehicle’s speed but also displays navigation and road sign information, is a £1,000 option but one which makes for comprehensive instrumentation.
The driving position is first class delivering an excellent view of the road while the seats are supportive and nicely comfortable – even the third row which has been designed to for people up to 5ft 7ins.
In a body which is similar in length to that of a Range Rover that is a clever achievement and even with all seats upright there is 451 litres of luggage space. Fold the seats flat and cargo capacity is almost that of a van a 1,951 litres.
It’s all very practical and well thought out with likes a shopping bag holder which folds out of the boot floor and a power operated tailgate which can be operated hands-free by waggling your foot under the rear bumper.
Options abound and one top grade Inscription model we tried carried more than £12,000 worth of extras including a 360 degree camera which gives an amazing overhead view of the car and the surroundings.
There was also a premium Bowers and Wilkins sound system which must be the best around at the moment and comes with a sound setting to mimic the acoustics of the Gothenburg Symphony Hall – Volvo’s home town and where it sponsors the Gothenburg Symphony Orchestra.
At any volume and whatever genre of music you select it is an utterly amazing experience and one unparalleled in any other model at the moment.
As with any Volvo safety devices are plentiful and the Swedes are pioneering to new systems on the XC90. One will apply the brakes should the vehicle stray into the path of oncoming traffic at a junction and the other detects so-called run-off situations where the car leaves the road inadvertently and primes the crash protection systems in advance.
That’s all part of Volvo’s Vision 2020 mission statement to make its cars the safest on the road and eliminate fatal accidents in all of its new models.
Volvo was first to use three-point seatbelts back in 1959 and that’s a point it is reminding every XC90 user with a dateline motif stamped into each belt buckle – one of a number of little touches that bring a smile to the face in this new SUV.
Some £7-billion of investment has been ploughed into the company since the Geely takeover and the XC90 is the first demonstration of how the new look Volvo car company means business.
Not only does the XC90 sit on a new platform which will become the underpinnings for all new big Volvos it also is an incredibly capable and stylish vehicle – and one which is packed with Swedishness. That runs from a new Volvo badge on the imposing front grille right down to a little Swedish flag stitched in to the side of the driver’s seat – a statement of pride if ever there was one which on the XC90 is absolutely justifiable.
Rating:

If you like this, why not read our review on the Volvo V60 D5 R-Design
Visit Volvo’s website