Toyota GR Supra Coupe road test review: DAVID HOOPER enjoys a few days getting to know this beast from the East with a pounding heart from the West.

IT’S no understatement to say I felt prominent, in this Promince Red Toyota GR Supra . . . after all, it’s hard to miss, or hear, and I don’t think I’ve attracted so much attention to myself on the road for quite some time!

Be in no doubt, this is a proper car for the committed petrol head which is capable of frightening you and thrilling you in equal measure! Especially on greasy Spring roads, but more of that in a minute.

Its critics say it’s a BMW in disguise, which by no small measure is true, as the car is a BMW under the bonnet and inside, but I would argue that is no bad thing, and with a £54,340 price tag, it’s certainly not a cheap proposition, but it is a very attractive one. With overtly aggressive styling in the form of aero-dynamic diffusers, side skirts, and air vents this Toyota looks much better than the BMW Z4 upon which it is based, and I think it stands favourable comparison with a Porsche 911 in the performance and handling department, but it costs substantially less.

This Toyota GR Supra is the nearest thing I’ve driven to road-going race car for some time. It has prodigious power, and motorbike fast acceleration – from a standing start to 62mph in 4.3 seconds on its way to limited top speed of 155mph.

Slide into the cockpit, for that is almost what it is, and press the silver start button and the three-litre straight six burbles into life with a noise level that will rattle your house windows if you’re parked close to the front door.

It has 335 braked horses chomping at their bits, and a huge 500Nm of torque, which by most standards is a ridiculous amount of power to channel through just the rear wheels – it’s asking for trouble, and without an extremely efficient traction control system, there would be plenty of it. Damp roundabouts and even moderately gentle bends need to be treated with respect as you reapply the power, and even when you’re not driving particularly quickly, you can feel the traction control working as the car limits the power and rear end jolts as a potential oversteering, wheel-twirling moment is averted by the excellent electronics.

But it is on dry roads where this car really comes into its own when you can get some heat into the huge Michelin Pilot Sport tyres (huge 275/35/19 rears) and brakes and really enjoy the Supra for what it is, an excellent cross-country companion that won’t fail to put a big grin on your face. The steering is beautifully weighted, and the brakes, although not razor sharp, give you what you need in stopping power and are fade free, even after a fairly enthusiastic driving stint. The acceleration can only be described as epic, and relentless. Believe me when I tell you that you will ease off the loud pedal before the car shows the slightest hint of running out of steam!

All this power is transferred to the rear wheels via an eight-speed automatic gearbox, which is actually pretty good, especially when Sport mode is selected, holding on to the revs a bit longer before changing up, and blipping the engine on the downshifts. There are flappy paddles to play with, but I didn’t really feel the need, which should tell you all you need to know about the gearbox.

The GR Supra sits on 19in forged alloy wheels and its ride and handling characteristics are excellent thanks to a comfortable but firm suspension set-up, and despite its power, the Supra is happy to potter around in a relaxed manner thanks to its smooth and flexible six-cylinder power plant.

Inside, there are only two seats, but they are grippy, supportive and comfortable. The interior is a straight lift from the BMW parts bin, but that’s no bad thing as it looks great and brings lots of toys to the party, such as a head-up display, adaptive cruise control, clever headlights, rear cross traffic alert and a rear view camera. 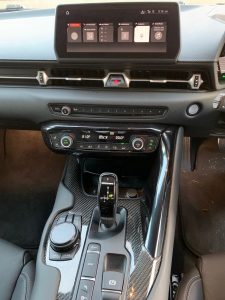 I also loved the wireless charging tray – just slip your mobile onto the tray and charging commences – it also has wireless CarPlay, which is excellent.

But what about running costs? Well, the official figures say the car will return a combined figure 34.45mpg in the WLTP test, but the best I achieved driving it like a saint, honestly I did, just once to see, was 24.5mpg. Enjoy the car though and that figure is only going one way, which might not be planet saving, but I enjoyed every mile of it! Road tax ain’t cheap either – it will sting you £530 in the first year currently with C02 emissions of 170g/km.

But who cares! The days when we are able to buy a car like this are truly limited with the Government banning the sale of new petrol and diesel cars in 10 years’ time, or at least that’s the plan. So get one while you can, and enjoy it to the full!

And it’s nice to know that were you to buy one now, its warranty will last for half of that time, five years, or 100,000 miles – which is a lot better than the warranty you get with the BMW!

If you like this, read our review on the new Toyota Yaris