THIS smart looking executive saloon is the latest model from Toyota to wear the Camry badge. It is a full hybrid, which means it has a battery which is charged mostly by the car’s 2.4-litre petrol engine, but it also gathers electricity when the car is effectively coasting down a gradient, or braking.
I haven’t been overly impressed with most hybrids I’ve driven in fuel consumption terms, generally returning mpg figures in the low to mid 40s at best, but this latest model has convinced me to change my mind. 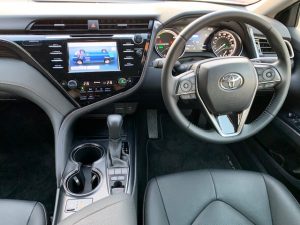 Over my week with the Camry, which saw us cover more than 600 miles, much of it at motorway speeds but with plenty of town driving thrown in, the Camry averaged 53mpg. That is better than my 2.0-litre diesel saloon, bought in part for its economy credentials, can manage in real world driving conditions.
With no plugs to attach to your house overnight, or a requirement to seek out charging points, a full hybrid car makes a lot of sense for people with an environmental conscience, but busy, pressured lives with little spare time to mess about charging their car – God knows recharging your mobile phone is enough for most of us!
With advances in battery technology and fuel consumption, the latest range of hybrid vehicles from the Toyota and Lexus stables are viable propositions, and with sensible prices, when compared to fully electric, or plug in electric alternatives.
This Camry will make a £30k dent in your cheque book, but many all electric cars will cost much more. For that money, you get a fully featured car with most of the things a driver could want these days, but Apple Carplay and Android Auto were notable by their absence. 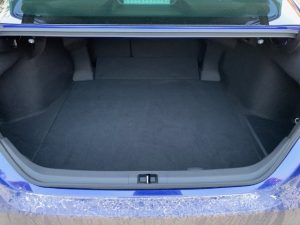 The Toyota full hybrid system uses a combination of a petrol engine and a battery. The engine charges the battery as the car drives, but when the car is coasting, travelling downhill, or braking, energy is recovered and used to replenish the battery, allowing the car to operate as an electric vehicle for short periods of time in towns and in traffic, but those short periods of time have become noticably longer, with a light right foot managing to extract several tenths of a mile at a time on battery alone.
The switch between battery and engine is virtually imperceptible, and the driver doesn’t have to think about it – they only thing they need to concentrate on is driving the car.
The battery is concealed within the car, leaving plenty of room for up to five people inside, and a good sized boot at the back, too.
Think of the Camry as a comfortable cruiser, although it does have a Sport button which mainly seemed to stiffen up the steering response. Dynamically, it is competent without being exciting, but will get you from A to B drama free. Parking sensors, a rear camera, and plenty of beeps all help with the parking, but some of the interior plastics do feel a bit cheap.
The central screen is home to all manner of displays and information, but my favourite, as with any hybrid, is the screen which shows you what the power train is doing and whether the engine or the battery or a combination of the two are powering the car.
The Camry is a competent all-rounder which for my money brings Hybrid technology to the level where it can compete with, and now beat, many diesel powered alternatives at a sensible price and without the need for plugging your car in at night.
Rating:

If you like this, read our review on the Toyota C-HR Hybrid