Built with the urban jungle in mind, this Lexus UX 2.0 250H Premium Pack is compact and robust enough to survive city centre car parks, yet perfectly capable of taking a longer trip comfortably in its stride.
Despite its compact proportions, its raised ride height creates the impression of being bigger than it actually is, helped by its angular wheel arches clad in protective plastic to defend against other cars’ doors in close-quarters car park combat!
With parking sensors fore and aft, manoeuvring into the tightest of spaces is never a problem, with yet more help provided by the rear camera.
The UX is Lexus’ take on small SUVs, and even offers some four-wheel-drive versions. 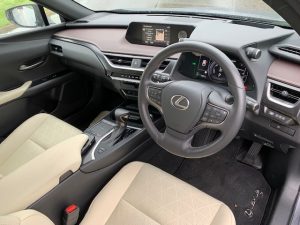 If the interior wasn’t a comfortable place to be, this wouldn’t be a Lexus, but some of the interior plastics felt decidedly cheap, which is something I didn’t expect to find in a car costing £30,000!
The Lexus UX with its hybrid technology is good to drive, and despite its relatively high stance, handles confidently when you tip it into a bend, or attack a roundabout with any degree of intent.
The petrol hybrid powertrain works faultlessly, but the CVT gearbox can be a bit tiresome when the car is driven reasonably quickly. I’ve never been a great fan, but they are a lot better now than they once were.
That said, CVT gearboxes are supposed to be more economical, and our test car returned an impressive 46.8mpg over a distance of more than 700 miles of mixed, but largely motorway driving, which isn’t too shabby.
The Toyota full hybrid system uses a combination of a petrol engine and a battery. The engine charges the battery as the car drives, but when the car is coasting, travelling downhill, or braking, energy is recovered and used to replenish the battery, allowing the car to operate as an electric vehicle for short periods of time in towns and in traffic, but those short periods of time have become noticably longer, with a light right foot managing to extract several tenths of a mile at a time on battery alone.
The switch between battery and engine is virtually imperceptible, and the driver doesn’t have to think about it – the only thing you need to concentrate on is driving the car. The battery is concealed within the car, leaving plenty of room for up to five people inside.
The central screen which dominates the dash is home to all manner of displays and information, but my favourite, as with any hybrid, is the screen which shows you what the power train is doing and whether the engine or the battery or a combination of the two are powering the car at any given moment.
Equipment levels are good and reasonably intuitive to use, although programming the sat nav did cause a degree of head scratching on occasions.
Interior space is quite good, and with six-footers up front, there is still room in the back for adult passengers. Further back though, the boot has a high floor and space is a bit limited.
Overall, I liked the Lexus UX, it’s comfortable and economical to run, but with a £30,000 price tag, it’s not cheap.
Rating: