All car manufacturers are now introducing some form of electric vehicles to their ranges and Suzuki is no exception, but unlike many hybrid or fully electric vehicles, this Suzuki Swift is an affordable proposition.
Even with its go-almost anywhere all-wheel-drive system, it still costs well under £20,000, with this well-specced SZ5 model costing £18,245 on the road.
Our Suzuki Swift test car is a mild hybrid, and it’s the first hybrid car I’ve reviewed in which you can actually see the battery – it’s so small it lives under the passenger seat!
The Suzuki Swift is built in Sagara, Japan and first went on sale towards the end of 2017. It offers ample accommodation for four to five passengers, provides a comfortable ride, has a willing 1249cc engine and offers diesel-rivalling economy, returning 47.4mpg during my few days with the car which saw us cover more than 550 miles of every type of road and driving you’re likely to come across in everyday use.
The engine meets Euro 6 standards and its low C02 emissions means your road tax, or VED in the first year costs £140 and then £135 in subsequent years, so it’s not going to break the bank to run it. 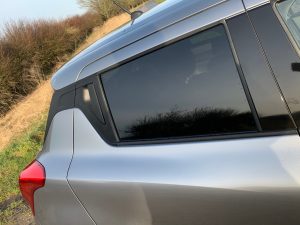 Our test car was well equipped, with all the mod cons you’re likely to need, including Apple CarPlay and Android Auto which allows you to use your own sat nav apps, although Suzuki does provide a perfectly adequate sat nav system should you prefer.
You also get DAB radio and a hands-free telephone system, all controlled from the large, clear screen in the middle of the dashboard which also doubles as a reversing camera.
In front of the driver a display between the speedometer and the rev counter offers a plethora of information, which you can tab through using a button on the fascia, but you have to search for it behind the steering wheel. It offers all sorts of information – you can watch what your hybrid battery is up to, select a G-force meter which shows how hard you’re cornering or braking, or opt for various displays which show how much of the car’s power or torque you are utilising at any given moment.
It was also quite interesting to see how much fuel the Swift’s start-stop system had saved me during the course of the week by letting the engine switch off in traffic queues or at long delay traffic lights. It reckoned I had saved 20 minutes of idling time, which equated to around 128 miles worth of driving, which seems like quite a lot to me, but whether it’s right or not, there’s no doubt it saves you some fuel, and therefore emissions and therefore keeps the car’s CO2 levels down.
The Suzuki Swift is a great little car to drive. It feels well screwed together as you would expect and will potter around quite happily with its positive five-speed gearbox slotting neatly from gear to gear.
If you want to extract some more of its performance, you have to the rev the engine fairly hard, as the maximum 120Nm of torque comes into play at a relatively high 4,400rpm and its maximum power of 90PS is unleashed at 6,000rpm. Keep the engine spinning between those two figures and the car can be quite a lively and entertaining little performer, and with Suzuki’s Allgrip system, the car always feels stable and sure-footed, even when challenged by the strongest crosswinds on motorways – as I found out!
The Suzuki Swift is a great little car and with its mild hybrid system can be a very cost-effective proposition for those looking for a small car with lots of character!
Rating:

If you like this, read our review on the Suzuki Jimny