THIS smart looking SEAT Ateca is practically proportioned without being too unwieldy and will appeal to owners who need a decent amount of interior space, but don’t want a car with a large exterior footprint which is difficult to park in busy car parks.
The Ateca is SEAT’s first, and arguably belated debut in the popular SUV sector, and the new range takes its name from a village in Spain – just in case you were wondering! Not only is it gunning for sales from its VW Tiguan sister, but is also setting its sights on Nissan’s hugely popular Qashqai and everything in between.
At the back, a good sized boot will easily swallow pushchairs, shopping and other family clutter, while inside, there is ample space with smartly designed and upholstered seats. The dashboard and centre console look very smart and are just about on par with the best the VW Group has to offer. Instrumentation is clear, and quite generous, with our test car featuring cruise control, trip computers and electric everything. 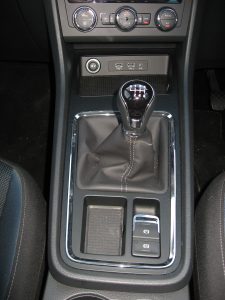 The large screen sitting at the top of the centre console is the interface by which you interact with many of the car’s functions, including the trip computers and even an off-road mode I discovered in one of the sub-menus, although I’m not sure many Ateca owners will be venturing far off the beaten track. There are also eco-driving tips to help maximise fuel consumption and numerous other useful gadgets.
One of the most useful of those is the Apple Car Play system, which lets you control your phone from the car’s screen, all the more important after the penalties for using a mobile phone while driving have just been increased to six points and £200 fine – not something you want to get caught doing, but it’s surprising how many people still risk it. You simply connect your phone via one of the USB ports in the centre console and allow the car to access it, and you’re done. It couldn’t be easier to use, and comes with smart, modern icons which are attractive to use.
Our test car was powered by SEAT’s 1.0 TSI engine, which provides an impressive account of itself in performance terms, although you do have to work the six-speed gearbox quite a bit to extract that performance from it, as, with all these little engines, they lack torque, which means that if you put your foot down in top gear at a moderate speed, not much happens for some time!
It is capable of getting from 0-62mph in 11 seconds and can reach a top speed of 114mph. Economy is also reasonable – during my few days with the car, we covered around 400 miles and the Ateca returned an average of 41.3mpg.
The driving position is good and can be adjusted to suit most sizes and shapes and there was nothing to be concerned about in the ride and handling department. The car drives very well. The only thing I didn’t like was the silver trim around the gear lever on the centre console which reflected the street lights in such a way that it looked like something was flashing in the car. I had to put my elbow over it to obscure it and if the car was mine, I would be looking for a more permanent fix.
Other than that, I liked the Ateca, which comes with a good choice of larger petrol or diesel engines which some buyers will no doubt prefer. And with prices starting from just under £18,000, it represents good value for money in my view, and is worth considering as it stands up well against its rivals.
Rating: