A SPORTY version of the Bentley Bentayga SUV has been revealed and the car comes with more muscular looks as well as a top speed of 180mph.

The Bentayga S is the latest version of Bentley’s benchmark luxury SUV, designed and engineered in the UK and manufactured in Bentley’s carbon-neutral factory in Crewe.

It joins the standard V8 version, a plug-in hybrid option and the higher powered W12 Bentayga Speed and will be priced from £179,600.

With sport suspension and 542hp coming from its V8 engine the Bentayga S has a 0 to 60 acceleration time of 4.4 seconds and will be available with a four, five or seven seat cabin configuration. 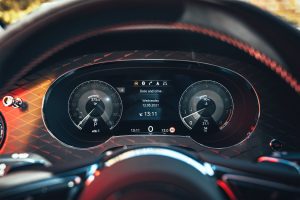 It is the first time the company has used an S designation on the Bentayga since its launch in 2015 and it comes with an active chassis as well as stiffer dampers to help its dynamics.

On a full tank the Bentayga S has a range of 406 miles with an official fuel return of 18.5mpg and emissions of 294g/km.

A new sports exhaust is included as standard and the car’s torque vectoring set up has been recalibrated to help responsiveness when cornering.

The Bentayga S has a range of special exterior features, including new 22-inch wheels with three finishes, innovative ‘S’ badges positioned on the lower edge of the front doors, and Blackline Specification as standard.

Like the range-topping Bentayga Speed the S has a fully digital driver’s information panel with pronounced dial graphics that have been designed akin to high-end chronographs.

The car’s display screen can be viewed in either Classic or Expanded format. In Classic, the display shows the traditional two-dial design of speedometer and tachometer.

In Expanded mode the right dial is replaced with an area for maps and media information.