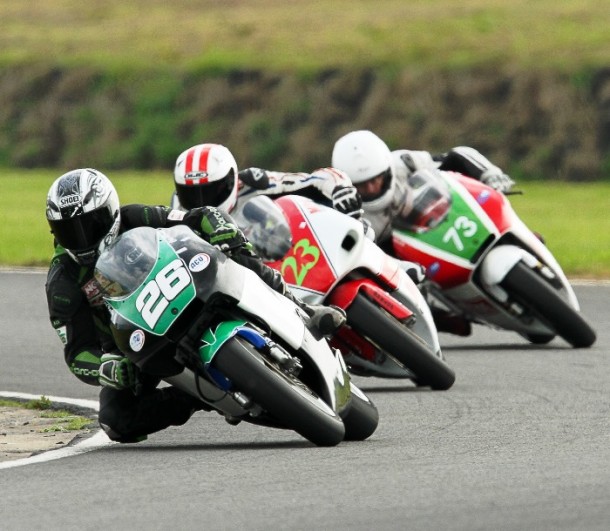 Chris Martin is one of the riders batting for the 250 National title.

THIS Saturday will see the crowning of the 2014 NG Road Racing Champions at Thruxton.

The Hampshire circuit is renowned as the fastest circuit in the country.

Only the toughest will succeed as the quickest NG competitors will top 170mph and average in excess of 105mph, and bumper grids are guaranteed across all of the classes.

The current lap record-holder is Luke Jones aboard his Acumen T3 675 Triumph Daytona, which he will campaign this weekend in the 600 Open and Sound of Thunder races.

The 600 Open battle is tipped to be one of the most competitive of the meeting, with as many as 12 pretenders for victory and a thrilling title duel in prospect between teenage rivals Max Symonds and Corey Lewis. Throw into the mix the likes of former British champions Jones, Josh Day and Dan Cooper as potential spoilers, and there is not likely to be a moment to breathe from lights-out to chequered flag.

The headline class will be the 40-strong Phoenix Open, in which the fastest riders of the meeting will duke it out for one of the biggest prize funds in the country. Record-breaking multiple NG champion Phil Bevan – the most successful competitor in the series’ history – is once again the man at the top of the table and has been the rider to beat season-long on his ZX10 Kawasaki. The Welshman will also star in the Superbike classes as he takes on Peter Baker, Mark Compton, James Kiff, Nick Williamson, Jamie Loveday, Dan Helyer, Kevin Davies and Roo Cotton.

A similarly spectacular showdown is to be expected in the 250 GP ACU National Championship – the UK’s premier Grand Prix-based series, populated by a grid of flame-spitting erstwhile 250cc world championship-spec machinery. Christopher Martin has been unbeaten all year and is looking to complete an unprecedented clean sweep at Thruxton, but former champions Ant Hodson and Daniel Jackson are eager indeed to blot his impressive copybook, as are Andrew Sawford, Dave Hampton, Darrell Higgins and Mark Linton.

Amongst the young hotshots rising through the ranks is 14-year-old Liam Delves – Formula 125 Champion for the second year running on his 125 Aprilia. Just one year his senior, Mark Clayton is head-and-shoulders above his 125 GP adversaries – and both have an eye on stepping up to the national scene in 2015.

Sound of Thunder, production-based Streetstock, Pre-Injection, GP45, Formula 400 and Sidecars add to the 20-race schedule of entertainment, and in all classes, power, skill, slipstreaming and bravery will be pivotal around the Hampshire circuit’s flat-out sweeping curves.

“The NG Road Racing Championship is one of the most exciting bike series in Britain, and we are delighted that Thruxton will be the scene for the title-deciders in the majority of the classes,” commented Thruxton Group managing director Bill Coombs.

“We are proud of the fact that our circuit is recognised as the fastest and most challenging in the country, and as such, there could not be a more fitting test for the NG competitors. One thing is for sure – whoever wants to be crowned champion this weekend, they will certainly have to earn it!”

Adult tickets cost just £14 on the gate, with grandstand seats an additional £5. Accompanied children aged 15 and under are admitted to the circuit free-of-charge. Track action begins at 09.00, with the first race scheduled for 10.45. For a full event timetable, see: