Do you check your tyre’s pressures as often as you should? I bet you don’t! DAVID HOOPER reviews this clever little system from Michelin which tells you when your tyre pressures drop 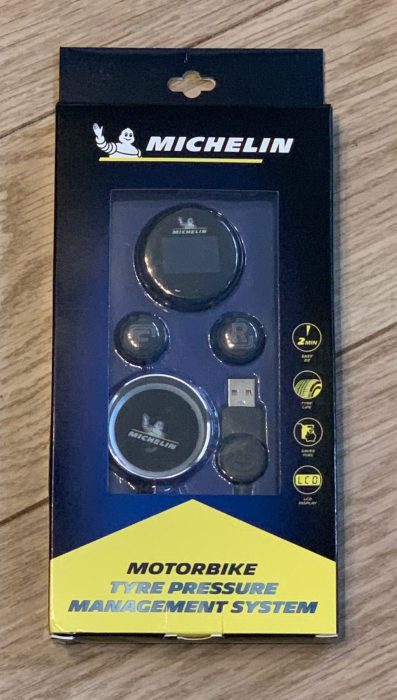 YOUR motorcycle’s tyres are the only things that keep you on the road and away from the walls, hedges and fields beyond.

Bikers have a wide choice of tyres for their various styles of machines, and depending upon what their owners like to do with them. Some will choose soft sticky rubber for maximum grip through the bendy bits, while others will prefer harder compound touring tyres, or even semi off-road covers, but whatever suits your needs, you can’t just fit them and forget.

Regular checks for cuts and damage are important, and part of those checks should be your tyre pressures. Under-inflated tyres can increase fuel consumption, tyre wear and adversely affect the bike’s handling, but how do you know if the tyres have lost a few pounds since you last wheeled it out of your garage. Some people think they can tell by looking – you can’t. Or by the way the bike rides – not always the case, as my friend demonstrated beautifully the other day, but more of that in a minute.

This Fit2Go Michelin Tyre Pressure Monitoring System is great little accessory for bikes of all shapes and sizes. It’s easy to fit and will give you an early warning of a deflating tyre – like a puncture while you’re enjoying your Sunday blast.

It literally takes two minutes to fit – simply set your correct tyre pressures and replace your valve caps with the ones in the kit – they’re even marked “F” and “R” for front and rear, so you can’t go far wrong – and that’s it.

The only other thing you have to do is attach a little circular monitor to the bike. The monitor is charged inductively by placing it in a little holder which plugs in via a separate USB cable. The unit comes with a strong magnetic base, so I just placed it on my fuel tank, and when the bike moves the system activates. After a couple of minutes’ riding the sensors on the valve caps connect to the monitor and show you what your tyre pressures are with the display alternating between the front and rear readings. As the tyres heat up on a ride, the tyre pressures also increase.

Not only will it warn you if your tyre pressures fall by 15%, but it will give you an enhanced alert if the pressure drops by 25%, or becomes over-inflated by 35% or more, perhaps if the tyres get too hot after a bit of exuberant riding on a hot summer’s day, which could be just as dangerous.

I first spotted this Michelin Tyre Pressure Monitoring System at the NEC show in Birmingham and to be honest thought it was bit pricey at £79.95, but I have to say, that having tested the system, I am impressed. It looks and feels to be of good quality, the display unit is easy to read and just lifts out of its holder and slips into your pocket when you leave your bike while you go for a cuppa!

It doesn’t need any programming and features an LCD screen, has a battery life of up to three months between charges and can show tyre pressures in either psi or bar, toggling between the front and rear at set intervals.

My friend was quite cynical about Michelin’s Tyre Pressure Monitoring System when he first saw it. “You don’t need one of those – you know when your tyres drop in pressure,” he argued.

Well you might if you get a puncture, but guess who was complaining the other day that his bike “didn’t feel right” and wasn’t tipping in to corners as easily as it usually does. “I think there’s something wrong with it,” he said.

Guess what! His tyre pressures had dropped – by quite a lot. He pumped his tyres up to the correct pressures and his bike’s handling was miraculously restored. And now he wants a Michelin Tyre Pressure Monitoring System!

Then this happened . . . I came back after a ride and as I was about to put the bike away, I noticed the tyre pressure monitor flashing a white LED at me and showing the rear tyre pressure had dropped to just 7psi.

Fortunately I was on my drive, but the bike would have been dangerous to ride and it proved the worth of the system instantly.

I don’t think I really need to say any more than that!