IT’S not only the motoring judges and writers who have taken to Ford’s EcoBoost engine.

Winning awards is one thing, but the real success of any power plant is how many buyers choose to specify it when they sign up for a new car.

So, after an unprecedented third successive International Engine of the Year award, Ford’s small yet surprisingly powerful 1.0-litre EcoBoost engine has been declared as Europe’s best-selling turbocharged petrol engine for the first six months of the year, according to Ford figures.

So far this year, one in every five vehicles Ford sold in Europe was equipped with a 1.0-litre EcoBoost,* the engine block of which is small enough to fit on a sheet of A4 paper.

“Customers are clearly enjoying the benefits from a small engine that offers great fuel efficiency with no compromise to refinement or performance,” said Barb Samardzich, chief operating officer, Ford of Europe. “The range of models offering the 1.0-litre EcoBoost engine will rise to 11 when the all-new Mondeo is launched in the coming months, and the new 140 PS version in the Fiesta Red Edition and Black Edition shows there is even more potential.” 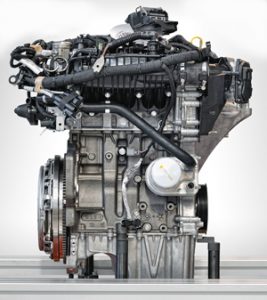 The 1.0-litre EcoBoost engine was in June again named the 2014 International Engine of the Year for its drivability, performance, economy, refinement and technology – fighting off competition from premium brands and supercars.

“This year’s competition was the fiercest yet, but the 1.0-litre EcoBoost continues to stand out for all the right reasons – great refinement, surprising flexibility and excellent efficiency,” said Dean Slavnich, co-chairman of the 16th International Engine of the Year awards and editor of Engine Technology International magazine, who presented the award. “The 1.0-litre EcoBoost engine is one of the finest examples of powertrain engineering.”

The engine has now won 13 major awards. In addition to collecting seven International Engine of the Year awards in three years – including Best New Engine in 2012 – the 1.0-litre EcoBoost also has been awarded the International Paul Pietsch Award 2013 for technological innovation in Germany; the Dewar Trophy from the Royal Automobile Club in Great Britain; and in the U.S., the Breakthrough Award from Popular Mechanics magazine. Ford also is the first automaker to win a Ward’s 10 Best Engines trophy for a three-cylinder engine.

Launched in Europe in 2012 with the Ford Focus, the 1.0-litre EcoBoost is now available in the UK in a further nine vehicles: Fiesta, B-MAX, EcoSport, C-MAX and Grand C-MAX, Tourneo Connect, Grand Tourneo Connect, Transit Connect and Transit Courier.  In the UK, of the 211,722 Ford vehicle sold in the first half of 2014, 23 per cent, or 48,693 vehicles, were powered by the 1.0-litre Ecoboost engine.

More than 200 engineers and designers from Ford’s research and development centres in Aachen and Merkenich, Germany, and Dagenham and Dunton, U.K., spent more than five million hours developing the three cylinder 1.0-litre EcoBoost.

“Setting a new global benchmark in powertrain engineering, this 1.0-litre EcoBoost engine is proving a big success with the judges that matter most – our customers,” said Samardzich.